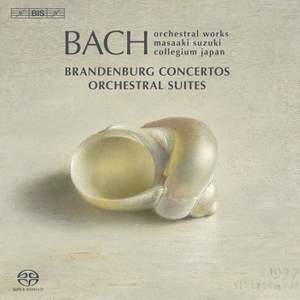 Masaaki Suzuki chose to replace the traditional cello part in four of the concertos with the violoncello da spalla – a smaller instrument played horizontally on the shoulder or held against the breast. The instrument has already featured in the BCJ Cantata series, and opens for new possibilities in timbre. Suzuki has also added a new movement to the 3rd Concerto – an arrangement of the 2nd movement of Concerto for Three Harpsichords, BWV 1064.