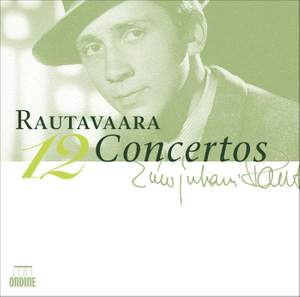 Rautavaara: Angel of Dusk - Concerto for Double Bass and Orchestra

I. His First Appearance

Rautavaara: Concerto for Harp and Orchestra

This first-ever edition of Einojuhani Rautavaara’s complete twelve concertos (written and recorded to this date) follows on the great success of the release of his eight symphonies, in a special box set.

Ondine’s long-time house composer is recognized as one of the greatest musical figures in Finland after Jean Sibelius. Between 1968 and 2001, he wrote solo works with orchestra for the violin, cello, double bass, harp, flute, clarinet, organ and the piano.

Highlights include the Violin Concerto which won a Cannes Classical Award in 1998, the Concerto for Birds (on tape) and Orchestra “Cantus Arcticus” which remains Rautavaara’s most popular and most frequently performed work of any kind, and the Third Piano Concerto “Gift of Dreams” which was commissioned, premiered and recorded by pianist-conductor Vladimir Ashkenazy. The other featured star performers include Patrick Gallois (flute) and Richard Stoltzman (clarinet).

The included recordings have been previously released to international popular and critical acclaim, and were all produced in close collaboration with the composer. The elegant box packaging, with the use of metallic colours, underlines the exclusivity of this edition, in combination with an attractive price.