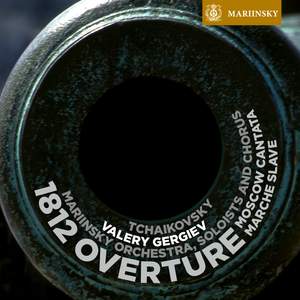 Slavonic March, the most individual of all the pieces, gets the liveliest, quirkiest performance and the best sound. — BBC Music Magazine, Christmas 2009, 5 out of 5 stars More…

I. Introduction and Chorus. Andante religioso

Valery Gergiev conducts the Mariinsky orchestra in a punchy, exciting account of the 1883 work written in honour of the coronation of Tsar Alexander III, plus the 1812 Overture, and the ‘Danish Overture’, composed for Alexander’s marriage.

Following acclaimed recordings of Shostakovich, the third release on the Mariinsky Theatre's new label features a selection of popular and rarely-heard works by Tchaikovsky.

Unlike the majority of his Russian predecessors, Tchaikovsky’s fame meant he received regular commissions for new work – he was the first ‘professional’ Russian composer. A new generation followed in his footsteps including Stravinsky and Prokofiev; for them, commissions were the norm.

Many of the works for which Tchaikovsky was commissioned were required to celebrate great state and political events. The Danish Overture was written to mark the marriage of the future Tsar Alexander III to the Danish Princess Dagmar. He was later commissioned to to produce the Moscow Cantata and Coronation March as part of the celebrations to mark Alexander’s coronation.

The patriotic Marche Slave was written for a charitable concert staged to raise funds for Russian volunteers in the Serbo-Turkish War. Although the 1812 Overture depicts Russia’s earlier war with Napoleonic France, the piece was actually commissioned for the opening of the Christ The Saviour Cathedral in Moscow. The cathedral itself was built to celebrate the 70th anniversary of Russia’s victory in the 1812 campaign of the wars.

Slavonic March, the most individual of all the pieces, gets the liveliest, quirkiest performance and the best sound.

…perhaps the most notable feature of these performances is their refusal to undermine the characterful in pursuit of the sensational. The Marche slave, for instance, is resonant and resolute but what you really come away humming are the fife and drum effects and brilliant trumpetings of the orchestration. The 1812 catches one off-guard straight away with its unusually "vocal" phrasing of the old Russian prayer at the outset and throughout the performance the song quotations sound "sung". Tempo (blistering) rather than trenchancy defines the main Allegro with the Marseillaise sounding unusually corny (deliberate?) in the trumpets. Tchaikovsky, though, is most evidently (and gloriously) Tchaikovsky in the Moscow Cantata. A vintage melody turns the first page of Russian history, illuminating it in that inimitable Tchaikovskian way.