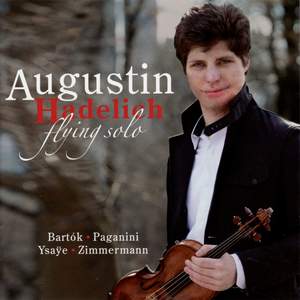 Augustin Hadelich… meets and surmounts all obstacles, yet it's not technical wizardry that most impresses but his musicianship. He makes the musical sense of each piece crystal clear, and his... — Gramophone Magazine, December 2009 More…

Paganini: Caprice No. 21 in A Major: Amoroso - Presto

Zimmermann, B A: Sonata for solo violin

‘Flying Solo’ is a dazzling solo debut by the prodigiously talented A ugustin Hadelich, a young violinist with a gripping and heroic personal story.

A child prodigy , Augustin Hadelich and was poised for a major international career. His rapid rise was, however, interrupted by an horrific accident in which he was burned over most of his body and not expected to survive. After repeated operations and months of rehab, not only has he lived to tell his tale, but has made an artistic comeback of astonishing proportions. Augustin moved to New York to resume his studies and went on to receive the Artist Diploma from The Juilliard School. In 2006, he was the Gold Medallist at the International Violin Competition of Indianapolis, and this year was awarded the Avery Fisher Career Grant, a $25,000 cash prize that has previously been given to such artists as Yo-Yo Ma, Joshua Bell and Murray Perahia.

‘Flying Solo’ is, quite simply , a stunning recording. The focal point is Bartók’s Sonata for Solo Violin, a work Augustin first played when he was 12. Having performed it for Yehudi Menuhin and on his Carnegie Hall recital debut, it is now a central part of his repertoire. He contrasts the Bartók with three of his favourite Paganini Caprices, two sonatas by Ysaÿe, and the intense, Bartók-inspired Sonata by Bernd A lois Zimmerman. Throughout, Flying Solo perfectly demonstrates Augustin’s dazzling technique and poetic style

“A masterful musician” The Strad

Augustin Hadelich… meets and surmounts all obstacles, yet it's not technical wizardry that most impresses but his musicianship. He makes the musical sense of each piece crystal clear, and his playing has an inner life, each phrase, each note, is felt as it's played.

Hadelich plays each with supreme confidence, the colours vivid, his bow control as impeccable as his intonation, the overall shaping always convincing, the direction and balance of line always clear...he is both a virtuoso violinist and a deeply thoughtful one.