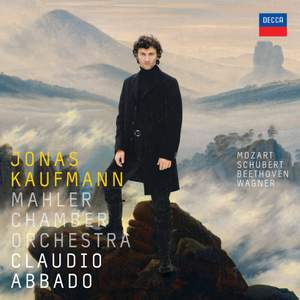 This disc, which has the luxury of Claudio Abbado's magisterial, refined conducting, shows that Kaufmann is at least as fine a Mozart singer as a Wagner one… His outburst from Act II of Parsifal…... — BBC Music Magazine, November 2009, More…

Jonas Kaufmann is now established as the most successful and versatile tenor of his generation, attracting rave reviews for his live performances and recordings.

Following the international success of Romantic Arias, Jonas Kaufmann returns with this album of outstanding arias from German opera; music of his homeland which he grew up hearing.

The great opera conductor Claudio Abbado directs the Mahler Chamber Orchestra and Arnold Schoenberg Chor in his first ever vocal recital recording for Decca, and his first Decca recording for almost 40 years.

Jonas Kaufmann's recording of Schubert's great German song cycle Die Schöne Müllerin with pianist Helmut Deutsch, will be released in 2010. This album will be packaged as a 'sister product' to this album of German arias.

This disc, which has the luxury of Claudio Abbado's magisterial, refined conducting, shows that Kaufmann is at least as fine a Mozart singer as a Wagner one… His outburst from Act II of Parsifal… is a thrilling foretaste of things to come… In Florestan's great aria from Fidelio we have a perfectly controlled expression of agony and exaltation. Everything here makes you crave to listen to this major artist in complete recordings, preferably, given his acting, on DVD.

Aside from the smooth, warm masculinity...he has enormous versatility, helped by a voice that, whilst tenor, has the deep tone and resonance of a baritone...These qualities also make Kaufmann the perfect Wagnerian tenor, his voice soaring above Wagner’s lush orchestral textures, and dramatically upping the ante for the many heart-on-sleeve climaxes.

Kaufmann is slowly but surely demonstrating that he may be the next hot tip. A calling card to be treasured.

…Fidelio, is the centrepiece of this disc: it receives a powerful performance from both tenor (his opening "Gott" is heart-piercing) and conductor. Kaufmann ends where he began, with Wagner. …his beautiful phrasing and controlled singing in the "Winterstürme" shows why he has become the most sought-after tenor of his generation, and is a highlight of this exciting new release.

No other compilation that has crossed my path comes within striking distance of this collection...The baritone-like richness to his singing in the Wagner extracts is especially compelling. That Kaufmann has Claudio Abbado and the superlative Mahler Chamber Orchestra to accompany him only makes the project even more special.