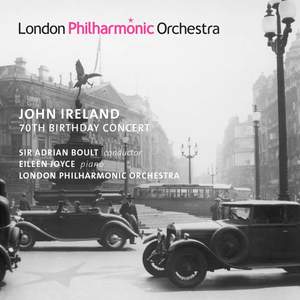 Recorded by the BBC live at the Royal Albert Hall, London on 10 September 1949

At times the sound calls for a fair degree of tolerance but the ear quickly adjusts - and the actual music-making is a delight. A London Overture in particular evinces an entrancing flexibility,... — Gramophone Magazine, December 2009 More…

I. In tempo moderato

Ireland: These Things Shall be

I. Say, heart, what will the future bring

II. These things shall be!

IV. These things, they are no dream, shall be

Sir Adrian Boult championed his fellow British composers; the results can be heard to this day on a multitude of recordings with the LPO on Decca and Lyrita, many still considered benchmark recordings. This included Vaughan Williams symphonies complete, extensive documentation of the works of Elgar and Holst, as well as Delius and Bax along with Ireland with Boult recording the symphonic rhapsody Mai-Dun, The Overlanders and in 1967 the Piano Concerto with pianist Eric Parkin.

Eileen Joyce is one of the few female classical artists to enjoy a celebrity, almost pop status, commencing during WWII and continuing right through the 1950's, her popularity often being compared with that of Vera Lynn. As Vera Lynn was the 'Wartime Sweetheart', entertaining the troops, Eileen Joyce boosted morale through the war performing as part of Jack Hylton's Blitz Tours. Her audience grew immensely through her film appearances, most famously performing the Rachmaninov concerto in Brief Encounter. As an Australian, she was a 'colonial' showman in Britain at a time of elite intellectual and social snobbery, and this somewhat worked against her, Joyce opting for the BBC Proms popular concerts at the expense of Royal Philharmonic Society recognition enjoyed by her contemporaries Solomon and Curzon.

John Ireland drew musical inspiration from his English heritage, its poets and landscapes. He became a celebrated composer during the first half of the 20th century, championed by conductors such as Sir Adrian Boult, who conducted the première of These things shall be in 1937. Boult programmed this Promenade concert in 1949 to mark Ireland’s 70th birthday.

At times the sound calls for a fair degree of tolerance but the ear quickly adjusts - and the actual music-making is a delight. A London Overture in particular evinces an entrancing flexibility, playfulness and songful warmth, while Eileen Joyce's partnership with Boult in the Piano Concerto frequently soars to inspirational heights (the slow movement is utterly magical - Boult's sublimely shaped opening paragraph effortlessly matched by Joyce's rapt pianism). Boult also directs These Things Shall Be with maximum conviction... the sound here is surprisingly full-bodied...