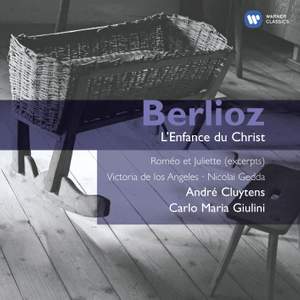 Introduction (Combat and Tumult - Intervention of the Prince)

Romeo at the Tomb of the Capulets

Hector Berlioz was the author of the text to his choral work L’Enfance du Christ (The Childhood of Christ), he did not like to call it an Oratorio, and composed the music between 1850 and 1854. The years of composition were not happy for Berlioz, his father had died in 1848 and two years later his wife, the Irish actress Harriet Smithson (whose performances had revealed the genius of Shakespeare can caused him to compose so many works inspired by that great writer) became severely paralysed and died the same year as the work’s first performance. The work is in three parts with four major soloists, a Narrator (tenor), Mary (mezzo-soprano), Joseph (baritone) and Herod (bass-baritone) and a four part choir. André Cluytens’s recording dating from 1965/6 has become a classic and his admiration for the work is clear, bringing the best from the team four superb international soloists – Victoria de los Angeles, Nicolai Gedda, Roger Soyer and Ernest Blanc. The set is completed by the recording of the orchestral music from Roméo and Juliette that Carlo Maria Giulini made with his Chicago orchestra in 1969.