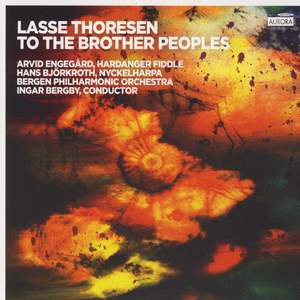 Lasse Thoresen - To The Brother Peoples

The epic works of Lasse Thoresen emerge between traditional folk music and art music. This recording by the Bergen Philharmonic Orchestra and conductor Ingar Bergby is released to mark his 60th birthday.

Thoresen’s musical output is very wide in its stylistic range. Over the years his works have received numerous prizes and awards, including Prix Jacques Durand (2001), Institut de France and the Edvard Prize (2003). He has also received commissions from such performers as Truls Mørk, Oslo Philharmonic Orchestra and Grieg Trio.

In Thoresen’s concerto entitled “To the Brother Peoples” the traditional instruments of Norway (Hardanger fiddle) and Sweden (nyckelharpa/keyed fiddle) meet up in a major piece for the first time. The work was commissioned for the centenary in 2005 of the dissolution of the union between the two countries. “The Sun of Justice” is a musical reflection on the founder of the Bahá’I religion Bahá’u’lláh (1817-1892) and his prophecy that life on earth will become harder before the true sun of justice rises. The orchestral piece “Emergence” is based on a traditional Sami chant and features two trombones which provide solo interpretation from behind the orchestra.