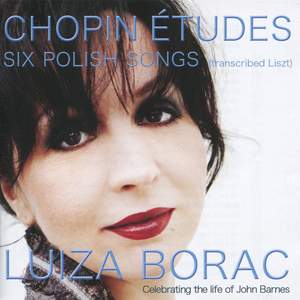 Luiza Borac’s award-winning discography on AVIE spans music by her compatriot George Enescu back to 19th century masterpieces by Schumann and Liszt. She returns to the Romantic era with a recording of Chopin’s groundbreaking Études. These virtuoso works were showcases for Chopin’s friendly rival Franz Liszt, who went on to transcribe six of the former’s Polish Songs. For Luiza, this recital has musical as well as personal significance as it pays tribute to her long-time supporter and producer, the late John Barnes. He was a true friend of Avie and introduced several other young artists to the label. Luiza’s Chopin was his last studio recording.

In these transcriptions Borac plays with lyrical beauty and unaffected poetry, projecting a sensitively-voiced singing line.

It is… rare to encounter on disc all six of Liszt's Chopin song transcriptions in sequence. It is even rarer to hear them played quite as well as this, easily the best versions of those currently available, not merely because of the intimacy and easeful rubato Luiza Borac brings to the music but for the lovely recorded sound.

The Romanian pianist is not just a wow playing her countryman Enescu — she understands Chopin equally well. The op 10 and 25 Etudes are dispatched with subtlety of touch and phrasing. Liszt’s transcriptions of Chopin songs serve as a charming introduction. As before, Borac is supported by a recording of caressing depth — a worthy tribute to the audio wizardry of the late John Barnes.