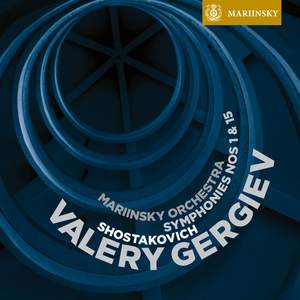 Following hard on the heels of Mikhail Pletnev's fine SACD version of Shostakovich's 15th is this impressively recorded version of the same work made in the sumptuous acoustics of the new Mariinsky... — BBC Music Magazine, September 2009, 5 out of 5 stars More…

Over 45 years separate the composition of Symphonies 1 and 15 and yet both exude creativity and Shostakovich's dark wit.The First Symphony owes much to the influence of Shostakovich's Russian predecessors including Tchaikovsky and Scriabin. However it also reflects contemporary artistic life and the optimism of the early years in the Soviet Union. By contrast the final symphony is a more bitter work, drawing on many of the themes that recur throughout Shostakovich's career and yet never resorting to melodrama. Establishing its own independent label gives the Mariinsky Theatre complete artistic and financial control over its recordings. It will be able to make more recordings than was possible in the past whilst ensuring that artistic values are consistently of the highest order. It will gain the freedom to choose which repertoire it records and enable listeners around the world to enjoy exceptional performances from one of the greatest opera and ballet companies. The Mariinsky Theatre can trace its origins back to 1783 when Catherine The Great issued a decree that led to its formation. It has staged the premieres of operas by Verdi, Borodin, Mussorgsky and Tchaikovsky as well as many of the great ballets including Sleeping Beauty,The Nutcracker, La Bayadère and Raimonda.The company remains committed to presenting new opera and ballet, most recently Smelkov's The Brothers Karamazov and in 2009 will premiere three new mono-operas based on works by Gogol. Under the leadership of Valery Gergiev its international reputation has blossomed with frequent touring and recordings. It recently reverted to the Mariinsky name, having previously been known more widely outside Russia by its Communist-era name of Kirov. Forthcoming releases from Mariinsky include a broad cross-section of Russian repertoire. Well-known and rarely heard music by Tchaikovsky and Shostakovich will feature alongside works such as Rodion Shchedrin's opera The Enchanted Wanderer. The next title, for release in November 2009,will include overtures by Tchaikovsky.

Following hard on the heels of Mikhail Pletnev's fine SACD version of Shostakovich's 15th is this impressively recorded version of the same work made in the sumptuous acoustics of the new Mariinsky Concert Hall. Whereas Pletnev emphasises the grim, almost nightmarish imagery of the first movement, Gergiev is much more playful and skittish, and the crystal clear recorded focuses upon the chamber-like aspect of Shostakovich's scoring. In the darker resonances of the ensuing Adagio, Gergiev weaves a more continuous symphonic thread... although the warmer perspective of the Gergiev recording brings a much greater depth and impact to the Symphony's final despairing climax.

Recorded at the new Mariinsky Concert Hall, adjacent to the historic “Imperial” theatre, these works are meat and drink for Gergiev’s outstanding Mariinsky players and bode well for what surely must become a complete cycle.