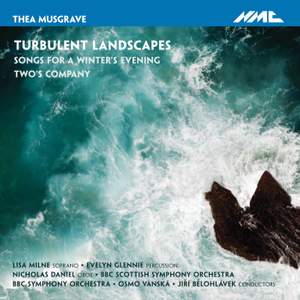 …a triptych of Thea Musgrave's works in wonderful performances from all concerned… Songs for a Winter's Evening is an endearing song cycle charting a woman's life and loves through text by Robert... — BBC Music Magazine, September 2009, More…

I. Sunrise with Sea Monsters

III. Snow Storm: Hannibal and his Army crossing the Alps

IV. War. The Exile and the Rock Limpet

VI. Sunrise, with a Boat between Headlands

Musgrave: Songs for a Winter’s Evening

No. 2. Summer's a pleasant time

This CD was recorded live at the BBC Proms and is produced in association with BBC Radio 3.

Turbulent Landscapes was commissioned by the Boston Symphony Orchestra. Each of the six movements is inspired by various paintings by Turner.

When question about being a ‘woman’ composer, Thea’s reply is ‘Yes, I am a composer, and I am a woman, but rarely at the same time’.

Two’s Company was written for Evelyn Glennie and Nicholas Daniel.

Songs for a Winter’s Evening was commissioned to celebrate Robert Burns on the 200th anniversary of his death in 1995. ‘Full marks to NMC for retrieving these recordings from the archives’

Rich, powerful musical language and a strong sense of drama have made Thea Musgrave one of the most respected and exciting of living composers. Born in Edinburgh in 1928, she studied at the University of Edinburgh then in Paris, where she spent four years as a pupil of Nadia Boulanger, before establishing herself in London with her orchestral, choral, operatic and chamber works. In 1970 she was named guest professor at the University of California, Santa Barbara, which anchored her increasing involvement with the musical life of the United States; in 1971 she married the American violist and opera conductor Peter Mark and she now lives in the US.

…a triptych of Thea Musgrave's works in wonderful performances from all concerned… Songs for a Winter's Evening is an endearing song cycle charting a woman's life and loves through text by Robert Burns. It draws on the tunes for Burns's verses, yet these are unmistakably, and beautifully contemporary reminiscences, sung exquisitely by Lisa Milne.

…Musgrave's… response to a group of Turner's painting in Turbulent Landscapes is a triumph: cogently structure yet uninhibitedly pictorial encapsulations of these canvases which manage to be economical, witty and distinctively expressive all at the same time. All three live performances come across well in recordings that bring out Musgrave's myriad instrumental felicities.