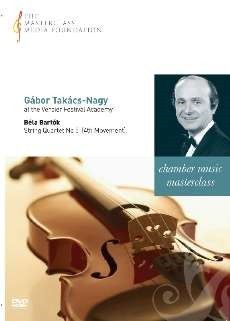 Gábor Takács-Nagy was born in Budapest where he started learning the violin at the age of eight. He attended at the Franz Liszt Academy, after which he studied with Nathan Milstein. From 1975 to 1992, he was founding member and first violin of the Takács Quartet which became world-renowned as one of the finest string quartets of its day. An inspiring and perceptive teacher, Gábor Takács-Nagy's chamber music masterclasses are greatly in demand. Since 1997, he has been Professor of String Quartet at the Geneva Conservatoire and he regularly gives masterclasses in various academies throughout the world such as the International Musicians' Seminar at Prussia Cove, UK and the Verbier Festival Academy. In this masterclass he works on the fourth movement of Bartok's 5th String Quartet.