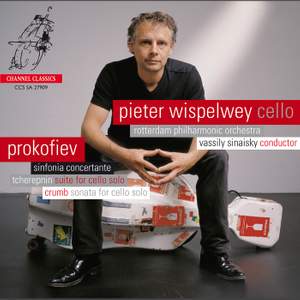 …Pieter Wispelwey… carries his audience through Prokofiev's epic narrative with a good deal of conviction, embracing wholeheartedly the work's vast array of emotions, which, in the central movement,... — BBC Music Magazine, September 2009, 5 out of 5 stars More…

In the midst of war and state-sponsored terror, one thing in Prokofiev’s life retained its priceless value: friendship. It was for his good friend, Mstislav Rostropovich, that he composed the Sonata for cello and piano, op. 119, and the Sinfonia Concertante, op. 125.

(…) ‘The attraction for cellists lies in the phenomenal technical challenge, the lyrical intensity and the many different roles the soloist, as the main character in this epic, has to play. A great fighting spirit is asked for. If things go well and the dragon is down at the end, the satisfaction is enormous. Besides, who wouldn’t want to be Slava for forty minutes? The presence and inspiration of the big man is all over the piece. (…)

(… ) For this live recording, to have the support of Vassily Sinaisky and this orchestra, that has a decade of Gergiev behind it, was a tremendous privilege. They were exciting days. The choice for the two solo encores, Tcherepnin and Crumb was made to give two examples on a totally different scale from the same early postwar years in which the Concertante was written. The Tcherepnin particularly, is almost on a miniaturist scale.’ (…)

…Pieter Wispelwey… carries his audience through Prokofiev's epic narrative with a good deal of conviction, embracing wholeheartedly the work's vast array of emotions, which, in the central movement, move schizophrenically from moments of tenderness and nostalgia to those of aggression and anguish. The two unaccompanied cello pieces provided an extremely enterprising coupling. Wispelwey draws a wonderfully haunting melodic line through the Oriental inflections of the Tcherepnin, while the Crumb, an early work strongly influenced by Bartók, is no less compelling.

Fine recordings of Prokofiev's problematic Symphony-Concerto… continue to appear. This latest is in some ways the most enjoyable of all, in that Pieter Wispelwey identifies completely with its restlessly shifting moods… delivering the lyrical themes more raptly than I can ever remember. Sinaisky and his Rotterdammers are with him at every step...