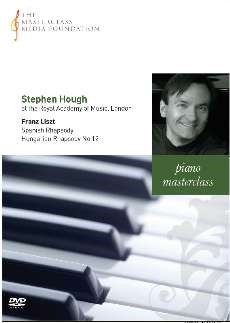 Piano Masterclass at The Royal Academy of Music, London

Described in the Sunday Times in 2008 as "Britain's finest pianist" Stephen Hough appears regularly with most of the major American and European orchestras under the finest conductors, and gives recitals at major venues and festivals across the world. He has recorded over 40 CDs many of which have won international prizes, including eight Gramophone Awards and three Grammy nominations. He is an avid writer and composer and in recognition of his achievements he was awarded the prestigious MacArthur Fellowship, joining prominent scientists, writers and others who have made unique contributions to contemporary life.

Stephen Hough is also a dedicated and much sought-after teacher. He is a visiting professor at the Royal Academy of Music in London and holds the International Chair of Piano Studies at the Royal Northern College of Music in Manchester.

In this masterclass he works with students on two of Liszt's virtuoso pieces for solo piano, The Spanish Rhapsody and The Hungarian Rhapsody no 12