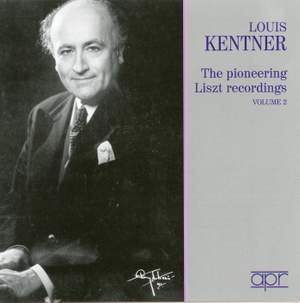 Kentner, a 'great-grandpupil' of the composer, offers Liszt that is aristocratic and technically exquisite - La leggierezza and La campanella as light as sound itself. Colour and sonority are... — BBC Music Magazine, August 2009, More…

Though Hungarian by birth, and having studied at the Franz Liszt Academy in Budapest, Louis Kentner, like so many others of Jewish origin, immigrated to London in the mid 1930s, aware that central Europe was not the best place to be at that time for someone of his race. He was to remain in London for the rest of his life, becoming very much part of British musical life both as pianist and, later, as teacher. His somewhat sensational London debut took place in the Aeolian Hall in October 1936 where he gave an all Liszt recital. As a direct result he was signed up by HMV and over the next fifteen years, in addition to much other repertoire, he made a large number of Liszt recordings which featured not only the often recorded etudes and Hungarian Rhapsodies but also premiere recordings of many of Liszt's more important, but then less well known, larger works. Our first APR title (APR5514) featured such unusual works as the Scherzo & March, the Berceuse and the first Polonaise; on the current disc, in addition to a number of the well known aforementioned etudes, we find a group of late pieces, including the bizarre Czárdás Macabre, which was only published in the year of its recording, and the Meyerbeer/Liszt 'Les Patineurs' scherzo. This later piece is one of Liszt's most brilliant operatic transcriptions, but is strangely little known. It is perhaps Kentner's most stunning recording and a fitting way to end this fascinating recital.

Kentner, a 'great-grandpupil' of the composer, offers Liszt that is aristocratic and technically exquisite - La leggierezza and La campanella as light as sound itself. Colour and sonority are magically imagined.

…throughout you will hear playing of a peerless scintillation, patrician command and a poetic engagement known to few pianists.