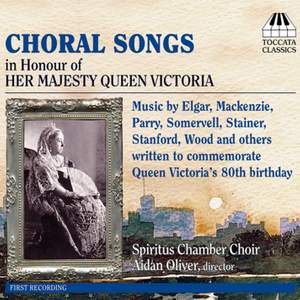 Lloyd, C H: A Thousand Years by the Sea

Elgar: To her beneath whose steadfast star

Stanford: Out in the windy West

Bridge, Frederick: For all the wonder of thy regal day

Parry: Who can dwell with greatness!

Davies, Walford: Hark! The world is full of thy praise

Martin, G H: The seaboards are her mantle's hem

Parratt: The Triumph of Victoria

In 1899, the 80th birthday of Queen Victoria provided a cause for national commemoration: musically, it was marked by the publication of a collection of Choral Songs by Various Writers and Composers in Honour of her Majesty Queen Victoria, recorded for the first time as a collection on this CD.

On the morning of the Queen’s birthday, 24 May 1899, an ‘aubade’ was arranged in the quadrangle of Windsor Castle and the Queen listened at the window of her breakfast room, while massed choirs performed four of the songs.

This tribute by the musical establishment emulated Thomas Morley’s volume The Triumphes of Oriana published in 1601 in honour of Queen Elizabeth I.

The collection is fascinating for catching the prevailing British musical ethos at the turn of the century and for heralding the renaissance in British music to come.

These choral songs are remarkable for their variety and invention, containing works by the leading organists and professors of the day, as well as Elgar, Wood and Somervell, representing the next generation.

Of these thirteen partsongs only the Elgar has been recorded before.

The recording is sumptuously presented in a slipcase with a 64-page booklet, containing an essay by Britishmusic expert Lewis Foreman, the full sung texts and French and German translations.