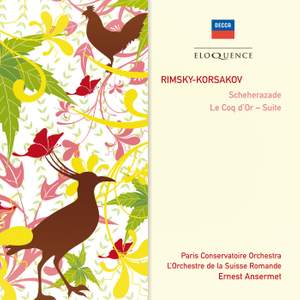 The Sea And Sinbad's Ship

The Story Of The Calender Prince

Festival At Bagdad - The Sea - The Shipwreck

1. Tsar Dodon In His Palace

3. Tsar Dodon As Guest Of The Queen Of Shemakha

4. The Wedding And Lamentable End Of Dodon

While Ansermet's stereo Suisse Romande recording of Scheherazade is well-known and has been frequently reissued, his early (1954) Paris Conservatoire Orchestra recording of this piece is a relative rarity and here receives its first CD outing on Decca. It has, perhaps, that extra bit of fantasy over his later recording of the work and was beautifully recorded by the Producer/Engineer team of Victor Olof and James Brown at the Maison de la Mutualite in Paris. Its coupling receives its first release on CD - the Coq d'Or Suite, recorded two years earlier (in mono) and which tells the tale of the ill-advised King Dodon who meets his end by being pecked to death by a golden cockerel!