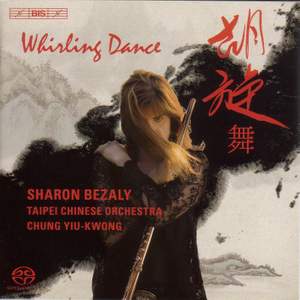 The title piece of Chung Yiu-Kwong… is a lively, entertaining piece, providing ample opportunity for Bezaly to display her agile articulation and clear tone. If you like Debussy (or even Rimsky-Korsakov!)... — BBC Music Magazine, November 2009, 5 out of 5 stars More…

“Anyone who has yet to encounter the playing of the astonishing young flautist Sharon Bezaly should do so without delay. She makes a sensational sound, can play anything from Bach to contemporary…” Classic FM Magazine

Together with the Taipei Chinese Orchestra and composer-conductor Chung Yiu-Kwong, Sharon Bezaly explores the sonic possibilities of the combination of Western flute and traditional Chinese instruments such as the erhu, guzheng, yangqin and zhongruan. Transverse (side-blown) flutes (typically made of bamboo) have long been important in Chinese music for more than 2000 years.

The sparkling music on this disc includes two newly composed works by Chung Yiu-Kwong, both dedicated to Bezaly, as well as a the arrangement of Ma Shui-Long’s concerto for bamboo flute and symphony orchestra into a concerto for piccolo and Chinese orchestra.

Of the remaining three shorter works, The Thivats of Autumn is an arrangement for chamber ensemble of a traditional Chinese classical tune for pipa, depicting the sadness experienced by Wang Zhaojun, one of ‘The Four Beauties’ of ancient China, as she is forced to by the Emperor Yuan (48-33 BC) to marry a foreign ruler and leave her country.

The title piece of Chung Yiu-Kwong… is a lively, entertaining piece, providing ample opportunity for Bezaly to display her agile articulation and clear tone. If you like Debussy (or even Rimsky-Korsakov!) you'll probably like this collection.

The Taipei Chinese Orchestra articulate with balletic grace, that extraordinarily delicate string tone projecting with determined swank. Sharon Bezaly is her dependable self; her piccolo-playing in the Ma Shui-Long is über-expressive and the right side of shrill; in Chung Yiu-Kwong's concerto her lyrical float through the slow movement gives the notes added gravitas.