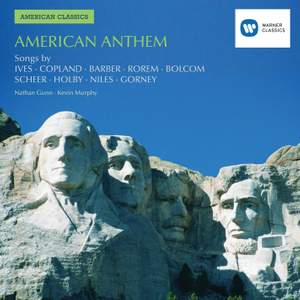 Gorney: Brother can you spare a dime (E. Y. Harburg)

Niles: The Lass from the Low Countree (text adapted by John Jacob Niles)

Bolcom: Over the Piano

Nathan Gunn was born in 1970 at South Bend, Indiana. He has appeared in many of the world's well-known opera houses including the Metropolitan Opera, Royal Opera House, Covent Garden, Paris Opera, Bayerische Staatsoper, Glyndebourne Festival and the Theatre Royal de la Monnaie in Brussels.

The music here runs the entire gamut of American song, from folksong arrangements to familiar art songs, from crossover ballads and patriotic anthems. Well-known names from more serious music such as Ives, Copland, Barber and Rorem share company with composers of more popular repertoire such as Bolcom, Gorney and Scheer.

Gunn sings everything with a seemingly endless flow of gorgeous sound; he is sensitive to the words and changing moods, and above all, shows an evident love of the music.