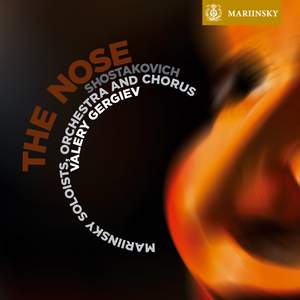 …Gergiev… wrings superb playing from his band, bringing real panache to the rapid alternations of contrast and grotesquerie and to the brilliantly inventive interludes. Vladislav Sulimsky as... — BBC Music Magazine, July 2009, 5 out of 5 stars More…

Scene I, the Barber Shop of Ivan Yakovleich, "A...Segodnia ya..."

Recording of the Week,  Gergiev at the Mariinsky

The Russian conductor presides over a ‘thoroughly worthwhile’ recording of Shostakovich’s surreal first opera The Nose, composed between 1927 and 1928 and based on a short story by Nikolai Gogol.

Dmitri Shostakovich's satirical opera The Nose was premièred in 1930 and set in St Petersburg. Based on a short story by Nikolai Gogol, its absurd plot revolves around the exploits of a pompous government official and his nose. After a visit to the barber, the nose absconds from the man's face and takes on a life of its own; the pretentious bureaucrat is reduced to desperation, frantically searching the city for his lost appendage. Although primarily a comic opera, The Nose touches on the struggle between the individual and society (here portrayed by a cast of over 80 characters), and its spiky score is a 1920's modernist masterpiece from the prodigiously talented young composer. Forthcoming releases from Mariinsky feature a broad cross-section of Russian music.Well known and rarely heard works by Tchaikovsky and Shostakovich will feature alongside the first recording of Rodion Shchedrin's opera The Enchanted Wanderer. 'Mariinsky' the label, will draw on the theatre's rich legacy and historical ties to the great Russian composers. It will showcase the extraordinary talent within the theatre and orchestra, presenting works that are both familiar and less well known, enabling listeners to enjoy exceptional performances from one of the greatest opera and ballet companies.The Mariinsky Theatre can trace its origins back to 1783 when Catherine the Great issued a decree that led to its formation. It has staged the premieres of operas by Verdi, Borodin, Mussorgsky and Tchaikovsky as well as many of the great ballets including Sleeping Beauty, The Nutcracker, La Bayadère and Raimonda. The company remains committed to presenting new opera and ballet, most recently Smelkov's The Brothers Karamazov and in 2009 will premiere three new mono- operas based on works by Gogol. Under the leadership of Valery Gergiev its international reputation has grown through frequent touring and recordings. It recently reverted to the Mariinsky name, having previously been known more widely by its Communist-era name of Kirov.

…Gergiev… wrings superb playing from his band, bringing real panache to the rapid alternations of contrast and grotesquerie and to the brilliantly inventive interludes. Vladislav Sulimsky as Kovalev is powerfully charismatic, on a par with Eduard Akimov in Rozhdestvensky's recording for characterisation and outdoing him in vocal beauty; he really holds the production together. ...all the vocal principals communicate utter insane conviction in the surreal, even Kafkaesque, world of Gogols story. ...the recorded sound is absolutely superb in its crystal clarity and depth...

Gergiev and his soloists give a scrupulously prepared account of the dauntingly rebarbative score, finding a suavity, euphony and poise that are anything but readily accessible.

the sound of the orchestra and soloists on this new recording is quite superb. The Nose is one of Shostakovich’s earliest works and was written when he was in his early twenties. In many ways I’d say it sounds like it, and while there isn’t really enough material to justify the three acts, it is really quite exciting to hear the way the unrefined and raw Shostakovich thought. Either way the performance is superb and it is a thoroughly worthwhile and enjoyable addition to the catalogue.

Recorded under studio conditions in the Mariinsky’s brand new concert hall, this version is notable for the brilliance of the orchestra’s playing and the idiomatic delivery of the Gogol-based text by a new generation of Mariinsky voices. Both Vladislav Sulimsky as the noseless collegiate assessor, Kovalev, and Sergei Semishkur as his errant appendage perform with panache.

Valery Gergiev perfectly catches the grotesqueries and acerbic satire of the work, based upon Gogol's short story. The vividness of the recording catches all the raw-edged detail of a score that amalgamates a range of modernist influences against a background of Rimsky-Korsakov's final opera, The Golden Cockerel, and Gergiev revels in its youthful exuberance. With a cast of some 70 named characters, it's a perfect work for a company like the Mariinsky.

The composer and Gergiev both drive their forces hard. The brittle, burlesquing orchestra sounds fine.