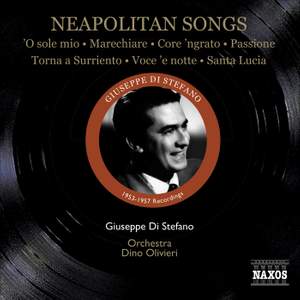 One of the most charismatic stars of the post-war operatic stage, the Italian tenor Giuseppe Di Stefano made numerous recordings, and was especially renowned as the performing partner of the equally fiery soprano, Maria Callas.

Having earned a precarious living as a singer of popular songs in Milan during World War Two, Di Stefano was also a highly accomplished singer of lighter music.

This experience, allied with the natural richness of his tenor voice, made him a master of the Neapolitan Song, as may be heard in this collection of his recordings of the cream of the repertoire, made at the peak of his career.

“Was it Giuseppe Di Stefano’s spontaneity and involvement in what he was singing which attracted so many collectors to his recordings? If one listens to his early 78s, one hears a third quality: the sheer beauty of his lyric tenor…Those recordings have been reissued a number of times and should be on the shelf of all who love the singing voice.” International Record Review