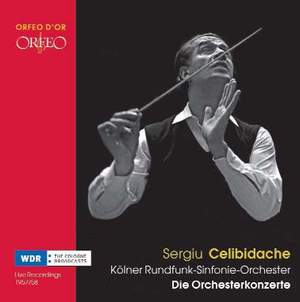 Blacher: Variations on a Theme of Paganini Op. 26

Sergiu Celibidache (1912-96) continues to enjoy the reputation of a revolutionary genius, a conductor uniquely capable of realising his interpretations without any concessions. It was a reputation that accrued to him not only during his early years in Berlin and in the final stage in his career in Munich, but also in the late 1950s, when he spent just over two years as permanent guest conductor of the Cologne RSO (now the West German RSO, Cologne), a period which, in spite of his well-known aversion to recordings, is extremely well documented in the form of the tapes held by the archives of West German Radio.These recordings, released with the active participation of the Sergiu Celibidache Foundation, convey a fascinating impression of the conductor's concert repertoire at this time. For what we find here is not just the monumentality familiar from other recordings by Celibidache such as those of Ravel's Ma mère l'oye and the Second Daphnis et Chloé Suite and Tchaikovsky's Sixth Symphony, but also an abundance of the youthful passion remembered from his earlier career. Listeners keen to hear Celibidache in a vocal work, a field that he rarely explored, will be pleased to encounter his recording of Brahms's German Requiem. Like the same composer's First Symphony, it features in this new five-CD compilation of Celibidache's work and attests to the conductor's great affinity with Brahms.