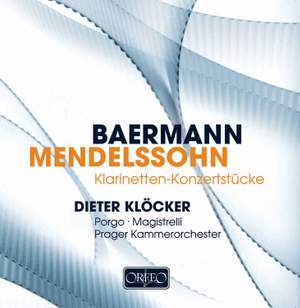 Carl’s own works give an idea of the Baermanns’ playing, alternating virtuosity with the singing tone that Berlioz, who heard them in Paris, so admired. — The Telegraph, 31st May 2009, 3 out of 5 stars

Heinrich Baermann and his son Carl were two of the great clarinet virtuosos of the 19th century, their artistry celebrated the length and breadth of Europe.To their friendship with Felix Mendelssohn we owe the latter's two Concert Pieces opp. 113 and 114, works associated with an amusing anecdote retold by Carl Baermann, who reports that the alternative title of the first piece, 'grand duet for sweet yeast dumpling and cream puff, clarinet and basset-horn', stems from a culinary duel fought between him and Mendelssohn in Berlin at the end of 1832. By preparing yeast dumplings and cream puffs, Baermann apparently persuaded Mendelssohn to respond to a commission that his father had given him some time earlier, encouraging him to slave away at his 'piano stove', while he himself busied himself in the kitchen. It cannot be said that either of these two works simmers at a low heat or that the second of them should be "thrown into the fire", as Mendelssohn himself insisted. In his new recording Dieter Klöcker ensures that these exuberant pieces come nicely to the boil.With Giuseppe Porgo he also rehabilitates two parallel works by Baermann that demonstrate the latter's abilities as a composer in addition to his skills as a cook.The better known of the two pieces is the Duo Concertant that father and son are known to have played together in Paris. In his Concertante for two clarinets and orchestra, finally, Baermann produced a piece that is a classic example of the sort of clarinet virtuosity that even then was coming to an end, its Classical introduction gradually giving way to typically Romantic colours and intervals, some of which reveal Slavonic influence.

Carl’s own works give an idea of the Baermanns’ playing, alternating virtuosity with the singing tone that Berlioz, who heard them in Paris, so admired.