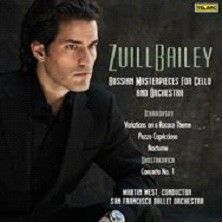 Russian Masterpieces for Cello and Orchestra

Overall the programme balances nicely enough as a calling-card for the stylish… soloist. …Zuill Bailey plays with impressive technical mastery… He is unfazed by the taxing double-stopping Shostakovich... — Gramophone Magazine, March 2009 More…

Zuill Bailey, the dynamic and exhilarating American cellist, makes his Telarc debut with the release of Russian Masterpieces for Cello. The recording includes Tchaikovsky’s Variations on a Rococo Theme Pezzo Capriccioso and Nocturne in D Minor Op. 19 No. 4, and Shostakovich’s Cello Concerto No. 1 in E-Flat Major, Op. 107. Zuill Bailey’s rare combination of compelling artistry, technical finesse and engaging personality have secured his place as one of the most sought-after cellists today. Bailey performs regularly with long-time duo partner, pianist Awadagin Pratt, as well as with pianist Simone Dinnerstein. He is also a member of the acclaimed Perlman-Schmidt-Bailey Trio, which also includes pianist Navah Perlman and violinist Giora Schmidt.

The voice of the cello is uniquely suited to the qualities of passion and melancholy that makes Russian music so provocative to listeners. Tchaikovsky’s Rococo Variations was written for the German-born cellist Wilhelm Fitzenhagen, a professor at the Moscow Conservatory. When Tchaikovsky left Russia for a lengthy stay in Western Europe, he gave Fitzenhagen a free hand in composition, which resulted in significant structural alterations to the piece. The cellist premiered his version of the Rococo Variations at a Moscow concert conducted by Nikolai Rubinstein in 1877. Tchaikovsky was displeased with the alterations, but later said, “The devil take it. Let it stay as it is.” The Fitzenhagen score is heard in Bailey’s rendition, and is considered an effective presentation of Tchaikovsky’s material.

Shostakovich wrote his first cello concerto in 1959 for the distinguished cellist Mstislav Rostropovich, who had frequently performed Shostakovich’s Sonata for Cello and Piano with the composer at the piano. It was premiered in Leningrad with the Leningrad Philharmonic and Rostropovich. When Shostakovich gave his only public performance as a conductor in 1962, the Concerto appeared on the programme.

Overall the programme balances nicely enough as a calling-card for the stylish… soloist. …Zuill Bailey plays with impressive technical mastery… He is unfazed by the taxing double-stopping Shostakovich frequently employs in the faster passages while finding commendable depth and solemnity in the slow movement.