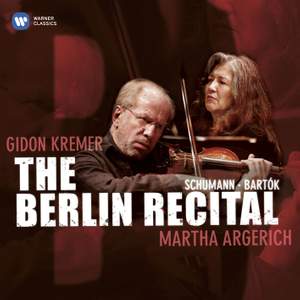 …what the Bartók in particular offers over and above their fine previous version is a sense of music-making caught on the wing. …the playing here is spectacularly vivid and assured. …above... — BBC Music Magazine, June 2009, 4 out of 5 stars More…

EMI Classics is pleased to announce the release of a joint recital by the legendary pianist Martha Argerich and Gidon Kremer, one of today’s most original and compelling violinists. The concert was recorded live at Berlin’s Philharmonie in December 2006. The repertoire features Schumann’s Sonata for Violin and Piano No. 2 in D minor and Kinderszenen, as well as Bartók’s Sonata for Violin and Piano No. 1 and Sonata for Solo Violin. Two encores, Fritz Kreisler’s Liebesleid and Schön Rosmarin round out the release.

“A summit of two musical giants,” wrote the Abendzeitung München, reviewing the concert. “They are chamber music’s dream couple […] The way they communicate musically cannot be surpassed by any other current duo” said the Münchner Merkur. The Neue Zürcher Zeitung summed up the concert with the words “chamber music is alive.”

Interviewed in the film, Gidon Kremer muses about his decades-long partnership with Martha Argerich: “The paradox is that, even though we are not a couple in love, we speak an intimate language through our music of the kind that is usually only spoken between couples in love. It is even possible that, through our music, we can become even more closely entwined than a couple in love can be.”

At first sight, Robert Schumann and Béla Bartók might not appear to have much in common. Schumann represented the German romantic tradition and favoured rich, full harmonies, while Bartók sought to escape from that sound world, his music tending toward “extremes of delicacy or sparseness, or of complexity or roughness, as his vision dictates.” Yet the two composers do have much in common: both were pianist-composers in whose output their own instrument retains a central place yet both had the ambition to reach out and embrace every musical genre; both Schumann and Bartok maintained a strong interest in music education and both promoted the status of music in the wider cultural sphere.

Schumann’s second sonata, in D minor Op. 121, composed in 1851, was dedicated to Ferdinand David, the dedicatee of Mendelssohn’s E-minor Violin Concerto. After Schumann’s death, the sonata was often performed by Joseph Joachim with the composer’s wife, Clara, at the piano. Kinderszenen dates from 1838, a period in which Schumann concentrated on music for solo piano. Kremer comments, “I love listening to Martha from backstage. I love the way she masterfully recreates the fragility of Schumann’s Kinderszenen. It is simply a heart-stopping experience.”

Bartók completed the first of his two violin and piano sonatas in December 1921 and the second the following year. He dedicated both to Jelly d’Arányi, a brilliant young violinist whose playing thrilled him and with whom he fell in love. In both sonatas Bartók treats the two instruments as independent but complementary – they do not share material, as the violin and piano would do in classical duo sonatas. In November of 1943, Bartók met Yehudi Menuhin when he came to play the First Sonata for him, prior to a performance. This meeting inspired the composer’s Sonata for Solo Violin, which Menuhin premiered at Carnegie Hall the following year. Although its structure is traditional and it recalls the first Bach solo sonata, having a fugue as a second movement and a fast triple-time finale, its constant rhythmic inventiveness gives the work a sense of improvisatory freedom.

…what the Bartók in particular offers over and above their fine previous version is a sense of music-making caught on the wing. …the playing here is spectacularly vivid and assured. …above all there is Argerich in Schumann's Kinderszenen. Since she has all but given up playing solo works in public, her admirers will want to seize the opportunity of hearing this performance shot through with characteristic spontaneity.

…for…the performances that make this Berlin concert absolutely indispensable are the two Bartók sonatas. The First Sonata… reaches fever pitch in the finale where Kremer swings in on a glissando and the two go hell for leather as one racy folk-style motif follows another. The first CD concludes with one of the finest ever recorded performances of Bartók's Solo Sonata, Kremer calling on his full repertoire of violinistic devices which include, in addition to the many called for in the score, a mastery of tonal colouring and a rhythmic grip that at times seem to transcend the limitations of the instrument.

The excitement is irresistible and their account of the first Bartók sonata is exceptional, too, balancing rhythmic drive against rhapsodic expressiveness. Each of them also has a work to themselves. Kremer gives a fabulously assured account of Bartók's solo-violin Sonata, while Argerich plays Schumann's Kinderszenen.

There are dazzling moments here, such as Kremer's bravura tackling of Bartók's Sonata for Solo Violin, where the astringent harmonies, bordering on dissonance, of the opening Tempa di ciaccona give way gradually to the dissipated state of the lyrical Melodia and then the animated Presto.

One of the greatest recitals I ever reviewed for this paper was given by the duo of Gidon Kremer and Martha Argerich and here they are some two decades later in another live recital from Berlin that shows them still at the height of their astounding powers. The coupling of Schumann and Bartók may seem odd, but both are dense, complex composers. Each player offers a solo as well as duos: the highlights are Argerich's solo, Schumann's Kinderszenen, full of the most aching, subtle rubato; and the duo's Bartók Violin Sonata No 1, with its hair-raising, stop-start finale - it's earthy and exciting. As a sugary reward, there are two delectable Kreisler encores.

The electricity of a live occasion surges through this recital of Bartók and Schumann, which Gidon Kremer and Martha Argerich gave at Berlin’s Philharmonie in December 2006.

Listening to Argerich, you pant for more from her: more concerts, more solo performances. But we handle endangered species with kid gloves. Except when we applaud — which the Berlin audience does, repeatedly.