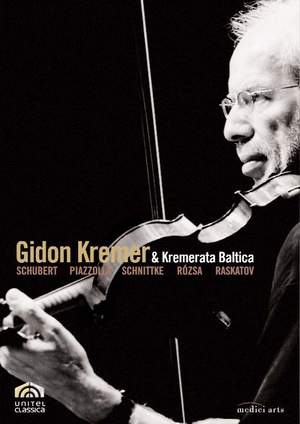 A brilliantly played concert, although the Schubert Quintet arrangement is disconcerting. It's good to see the enjoyment on the players' faces in the quirky Russian works, as well as the Rózsa... — BBC Music Magazine, June 2009, 4 out of 5 stars More…

Rozsa: Theme and Variations for Violin, Cello & Orchestra, Op. 29a

Gidon Kremer is not only one of the leading violinists in the world, but also - thanks to his unquenchable curiosity and search for new impulses - one of the most fascinating musical personalities of our time. His repertoire ranges from Bach to the present, whereby a number of contemporary composers have achieved international recognition through his commitment. This DVD presents a very original programme with rarely performed pieces and Kremer's own version for string orchestra of the Schubert Quintet which makes it particularly attractive. Kremerata Baltica, a chamber orchestra, was created in 1997 by renowned violinist Gidon Kremer, who serves as the orchestra's artistic director and solo violinist.The high artistic quality of the ensemble is the result of the exceptional talent of the individual musicians and Kremer's innovative approach to repertoire. Kremerata Baltica is composed exclusively of talented young musicians (average age 27) from the Baltic States and is supported by the Ministries of Culture of Estonia, Latvia and Lithuania, making the group the de facto cultural ambassadors of the region. Kremerata Baltica won a Grammy Award in 2002, was nominated for another in 2003, records for Nonesuch Records (a Warner Bros. label) and Deutsche Grammophon, and it performs in all the great halls of the world.

"Gidon Kremer…the great Latvian violinist and the brilliant chamber orchestra he has drawn from his own and neighbouring republics…performed with flair, intensity, precision and delicacy." The Independent

A brilliantly played concert, although the Schubert Quintet arrangement is disconcerting. It's good to see the enjoyment on the players' faces in the quirky Russian works, as well as the Rózsa and Piazzolla.