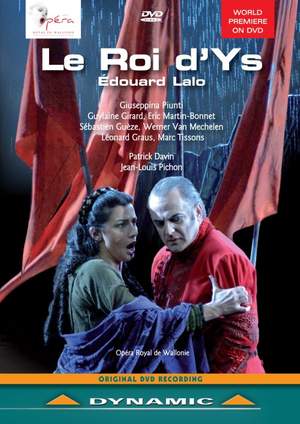 Patrick Davin conducts with some verve… and although the Daumier-like Victorian costumes look somewhat silly… the staging with its rocky cliffs and ruinous walls is effective enough, especially... — BBC Music Magazine, June 2009, 4 out of 5 stars More…

WORLD PREMIERE RECORDING of this three-act opera which originally premiered in 1888, less than four years before the death of its composer. It is sung in French.

The opera is a variation of the ancient Breton legend of the city of Ys, a mythical city built off the coast of Brittany which was subsequently swallowed by the ocean. In Lalo’s version the love-struck Margared, in a jealous rage, takes revenge on her sister Rozenn, and Mylio (whom Ma loves, but to whom R is engaged) by handing the keys to the sluice gates evil Karnac who inevitably opens them, threatening to destroy the city. Margared’s eventual suicide calms the sea and saves the city.

The choice of subject based in legend, as well as (albeit prudently used) leitmotifs associated with each of the principal characters strongly link the opera to Wagnerism, although it remains a decidedly French opera, with elements of popular music inspired by Breton folklore.

The first version of the score was completed in 1881 but in 1886 Lalo decided to rewrite it completely. It is impossible to know the changes he made as the first version was destroyed.

Patrick Davin conducts with some verve… and although the Daumier-like Victorian costumes look somewhat silly… the staging with its rocky cliffs and ruinous walls is effective enough, especially the rainwashed final cataclysm. Altogether a fascinating relic...

an excellent example of a neglected opera, superbly presented and thoroughly recommendable...the opera has plenty of action, and is altogether most entertaining in this excellent video presentation.