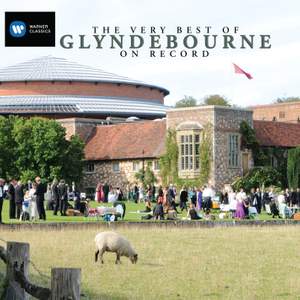 Offer, The Very Best of Glyndebourne On Record

Se a caso Madama (Act I)

O Polly, you might have toy'd and kissed (Mrs. Peacham / Polly / Peachum)

My heart was so free (Macheath)

When I laid on Greenland's coast (Polly / Macheath)

How happy could I be with either

The modes of the court

Ttiumphal March of the Devil

Gershwin: Oh, I can't sit down (from Porgy and Bess)

Dove: Figures in the Garden

I. Dancing in the Dark

II. Susanna in the Rain

V. The Countess interrupts a Quarrel

VI. Voices in the Garden

Bernstein: Glitter and be gay (from Candide)

The Glyndebourne Festival is one of the great opera “feasts” of the year; it runs from mid/late May to late August and in these three months it performs 6 operas. Glyndebourne is in Sussex, not far from the ancient town of Lewes, inland and to the east from Brighton; the operas are staged in a modern opera house (completed 1994) within the grounds of a country house. Many great singers have appeared on its stage as it seeks out new talent and gives them all an excellent grounding in the art of performance. The results are never less than excellent owing to the significant amount of time given to rehearsals, both soloist and ensemble, in a relatively relaxed atmosphere in the beautiful countryside. 2009 will mark its 75th anniversary and EMI Classics, which has made so many recordings there, is proud to celebrate the birthday with a box of 5CDs containing many memorable moments in its glorious history.

The Glyndebourne Festival Opera had its beginnings in regular amateur opera evenings organised by John Christie who adored music. At one such evening he met his future wife, Audrey Mildmay, who had been engaged to add a touch of professionalism to the proceedings. These events took place in the organ room so called because it contained one of the largest organs outside of a cathedral; this had been added by Christie once he came into full legal possession of the estate in 1920. Most of the house dates from the 1870s but there are timber frames and panelling which indicate that the original was built in the early sixteenth century.

During their honeymoon the Christies attended both the Salzburg and Bayreuth festivals and from this experience developed the idea of bringing professional opera to Glyndebourne (Christie’s original idea of “Wagner on the South Downs”, however, would have to wait for his grandson, Gus, who staged Tristan und Isolde in 2003). The planned opera house, with an orchestra pit capable of holding a symphony orchestra and a 300-seat auditorium, was much more suited to the operas on a smaller, more intimate, scale. Christie chose three exiles from Nazi Germany to lead the opera house – Fritz Busch as music director, Carl Ebert as artistic director and Rudolf Bing general manager.

The first festival opened on May 28th 1934 with Le nozze di Figaro; Così fan tutte was also performed. By 1936, when the classic Don Giovanni was performed, the theatre held 433 and by 1952 it was increased to nearly 600 and finally, in 1977, it held 850 people. The Second World War interrupted productions as the house became an evacuation centre for children from London. It took some time for the Festival to regain its momentum and the entire burden of financing it was undertaken by Christie himself. In 1952 the Glyndebourne Festival Society was formed to take over the financial management. John Christie died in 1962 and was succeeded by his son George (later Sir George) and further changed and improvements to the theatre continued.

By the 1980s it was becoming abundantly clear that if the Glyndebourne Festival was going to maintain its deserved reputation for excellence it was necessary for a complete new theatre to be built. So it was that the old theatre closed its doors in 1992. So many memories had been born in that theatre – luckily a good number were recorded and feature in this set, the three Rossini operas and, above all, the series of Mozart operas; there was, however, one evening above all for those lucky to attend – the production of Gershwin’s Porgy and Bess truly made history!

Whilst the theatre was being built the Glyndebourne spirit was brought to the Royal Festival Hall for performances of Lehár’s Die lustige Witwe with Dirk Bogarde providing hilarious linking passages between the musical numbers.

The new theatre took just about two years to build and cost £34 million, 90 per cent of which was raised through donations. It seats 1,200 people in a four-level, horseshoe-shaped auditorium with main level seating, two balconies and a gallery and the acoustics have been generally and widely admired. It was therefore 60 years to the day of the Festival’s inaugural performance, on 28th May 1994, that the new theatre opened its doors and Le nozze di Figaro announced that Glyndebourne was back in business!

Glyndebourne has a strong belief in developing for the future in all its facets – new artists, new audience and new music. One of the operas which was warmly applauded was Jonathan Dove’s Flight in 1999.

In 1991 Dove recorded his “Figures in the Garden” with members of the Orchestra of the Age of Enlightenment – now regular performers at the festival alongside the London Philharmonic Orchestra, which, whilst never quoting Mozart, hints at the Garden scene of Act 4 by employing the wind octet (two each of oboes, clarinets, bassoons and horns) so beloved of the master. The collection is completed by six extracts from a celebratory concert to mark the centenary of EMI.

The Glyndebourne Festival takes place from the latter part of May to the end of August – effectively the English summer (some might remark that Glyndebourne IS their summer such is the affection in which it is held by so many of its dedicated audience) – and now it is marking its 75th anniversary. There are legions of hugely grateful artists and music-lovers that will be raising their glasses for many more happy years at one of the loveliest musical venues in the world!