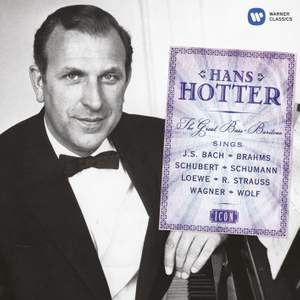 Hans Hotter was one of the major artists signed to EMI by the legendary record producer Walter Legge in Vienna as soon as the Second World War ended and one of his first recordings for the company was the Brahms Requiem under Herbert von Karajan, an extract from which is included in this set. This 6-CD set is devoted mainly to German Lieder and includes an impressive collection of songs recorded when Hotter was in his prime and generally accompanied by Gerald Moore. A number of tracks in this set are appearing in stereo for the first time on CD; their only previous stereo issue was on a local Angel LP in the USA.The two excerpts from Die Meistersinger are incomplete because the recordings were not released at the time they were made (1948) and some of the original 78 rpm masters had not survived by the time the items were issued on LP for the first time in 1982.