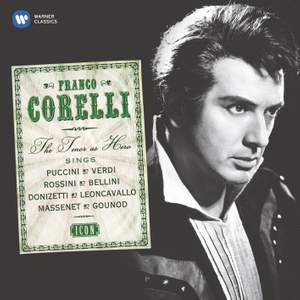 Giordano, U: Un dì, all' azzurro spazio (from Andrea Chénier)

Giordano, U: Vicino a te (from Andrea Chénier)

Franco Corelli began his stage career in Italy in 1951. With his powerful voice, charismatic stage presence and film-star good looks he soon became one of the 20th century’s outstanding operatic superstars.

He first came to prominence when he sang opposite Maria Callas at La Scala, Milan, in a production of La vestale in 1954. He subsequently partnered Callas at La Scala in Fedora and Poliuto and later appeared with her at the end of her stage career in Norma in Paris in 1964 and Tosca in New York in 1965.

Corelli made a spectacular debut at the Metropolitan Opera House, New York, in January 1961 in Verdi’s Il trovatore. He quickly became the Met’s leading tenor and performed there every season until 1974.

He recorded extensively for EMI throughout the 1960s, when he made a number of complete operas as well as several albums of operatic arias and songs.

This 4 CD set brings together the best of Corelli’s EMI recordings. From his operatic catalogue come a substantial number of arias, as well as duets with Birgit Nilsson, Mirella Freni, Antonietta Stella and Gabriella Tucci.

In addition to the operatic material, there are a large number of songs, including popular Neapolitan titles such as ‘Core ’ngrato’, ‘Torna a Surriento’ and ‘’O sole mio’, plus other items like ‘Granada’, Schubert’s Ave Maria and the Ingemisco from Verdi’s Requiem.

This album also includes a song recorded in Milan in 1961: ‘Si tu m’amais’ by Luigi Denza, that has never been issued either on LP or on CD since its initial release only in Italy in 1962 on a 45 rpm single.