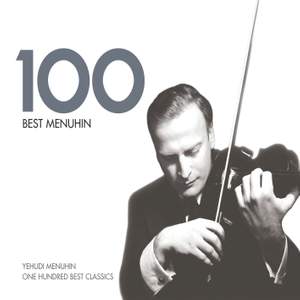 Brahms: Hungarian Dance No. 7 in A Major

This 6 CD set presents 100 highlights from the extensive catalogue of the legendary violinist Yehudi Menuhin.

Yehudi Menuhin (1916–1999) was one of the greatest musical figures of the 20th century. Throughout his entire life, he distinguished himself as a musician of the highest calibre, as well as an educator, a musical statesman and a compassionate and caring human being.

After making a few recordings of short encore pieces in 1928 for RCA Victor in the USA (the country of his birth), he began recording in 1929 for The Gramophone Company (one of the predecessor companies of EMI) and was an exclusive EMI artist for the remaining 70 years of his life – an achievement without parallel in the history of the record industry.

The six CDs are themed as follows:

The Vivaldi CD includes a complete performance of The Four Seasons, as well as four other popular concertos including The Storm at Sea, The Hunt and Pleasure.

CD 2 contains a representative selection of Menuhin’s many recordings of Bach and Mozart, including Bach’s Concerto for Violin and Oboe with Leon Goossens that enjoyed enormous success when a performance was televised by the BBC in the UK in 1962.

The violin concertos of Beethoven and Brahms were among the cornerstones of Menuhin’s repertoire. CD 3 includes substantial extracts from both of these concertos, as well as other popular pieces by the two composers.

CD 4 includes extracts from some of Menuhin’s most successful concerto recordings, including those of Mendelssohn, Bruch and Paganini. The disc ends with the conclusion of Elgar’s Violin Concerto, recorded in 1932 under the baton of the composer – one of the most famous recordings ever made.

CD 5 is devoted to showpieces and encores by composers such as Bazzini, Kreisler, Sarasate, Brahms and Paganini. These recordings, made in the 1930s, show the young Menuhin at the height of his technical powers.

Menuhin was always interested in new works, many of which were commissioned for him, and CD 6 includes several examples of such pieces. He also loved to explore different styles of music as exemplified by his collaborations with the Indian sitar player Ravi Shankar and the French jazz violinist Stéphane Grappelli heard here as well.