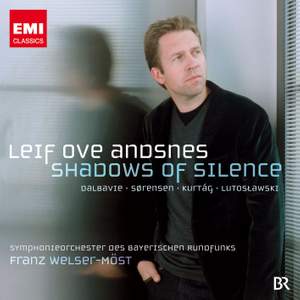 …this is a notable addition to Andsnes's discography. All his virtues are in display here, from the bravura of his flourishes and crispness of his chordal delivery in the two concertos to the... — BBC Music Magazine, April 2009, 5 out of 5 stars More…

Kurtág: Vizözön-szirénák (Sirens of the Deluge)

Joel Sorensen: The Shadows of Silence

“His enviably natural, unforced clarity and musicianship shine through every bar.” Gramophone

The Piano Concerto by Marc-André Dalbavie (b. 1961, France) was a co-commission of the BBC Proms, the Cleveland Orchestra and the Chicago Symphony Orchestra. Andsnes performed the world premiere with the BBC Symphony Orchestra/Jukka-Pekka Saraste at the 2005 Proms and subsequently performed the concerto with the Cleveland Orchestra, the Chicago Symphony/David Robertson and the Tokyo Philharmonic/Marc-André Dalbavie.

"I love working with him. I love his imagination." says Andsnes of Dalbavie. "He has such a colourful mind and always comes up with interesting thoughts and ideas which are very much reflected in his music. I love how one sound transforms itself into another through a musical chain of events. When he was resident composer in Risør in 2003, it was impressive how Dalbavie had it clear in his mind exactly what he wanted to hear." Preparing for the composition, Dalbavie met with Andsnes several times and heard him in concert often. “I've had a great experience with this pianist, his musicality, and powerful sound. He's both very strong and very soft, which is important to me. His sound is very lyrical, which I wanted to integrate into the concerto, and the lyrical sound of his playing is brought forth through the different materials. When he plays pianissimo, he doesn't make the sound low, but changes its colour. I was very surprised to find a pianist who could play so closely what I thought the music should sound like."

Following the performances with the Bayerischer Rundfunk Orchestra, the Abendzeitung wrote, “Pianist Leif Ove Andsnes convincingly played with energy and lyrical sensitivity. (...) the applause was just like after a Tchaikovsky (concerto), with great cheers for the soloist.”

The CD’s title work, The Shadows of Silence by the Danish composer Bent Sørensen (b. 1958), was commissioned by Carnegie Hall for performance by Leif Ove Andsnes in his prestigious 2004-2005 “Perspectives” series. "The Shadows of Silence is an engaging and unusually textured piece, filled with hushed, trembling sonorities drawn from the extremes of pitch at both ends of the keyboard. … evocative of an arctic landscape, with glistening watery surfaces stretching across vast spaces. Jagged chords slice through the calm, but there are also impressionistic washes of colour, infinite shades of white. … The music grows ruminative and halting as it drifts into the distance, blurring into silence. Mr. Andsnes played it with immense subtlety.” (The New York Times) Leif Ove Andsnes has said, “I play Shadows of Silence a lot in recitals because I love it so much. … It is very difficult … because [Sørensen] demands that you play the same notes many times, very fast but very soft. … there’s a kind of dreamlike landscape to it, which I really love being in. … There is one thing I have to do which is quite unusual: I have to hum along at the end of the piece. … When I played it in Carnegie Hall for the first time, the artistic administrator … offered me a vocal recital the next time…. which I’m not sure I will accept.”

Witold Lutoslawski’s Piano Concerto, composed in 1987-88, is considered the great piano concerto of the second half of the 20th century. In four connected movements, it combines twelve-tone techniques, tonal and polytonal harmonies with hints of Chopin, Ravel, Bach and Eastern European folk music. “With its large, sweeping gestures and dramatic interplay between the soloist and the orchestra, the piano concerto pays homage to this most popular of concert music genres. Yet even while writing a public piece hardly less accessible than the concertos of Prokofiev, Lutoslawski finds ingenious ways to make the music fresh, original and intellectually challenging.” (The New York Times, reviewing a performance by Leif Ove Andsnes with the New York Philharmonic) The Times went on to describe Andsnes’s playing as “commanding, elegant, incisive, rich with wondrous colours and full of imagination.”

György Kurtág began his Játékok series (Játékok means Games in Hungarian) in 1973. When he had completed his Opus 7 in 1968, Kurtág had a case of ”writer’s block” and decided to set himself the task of analysing works by other composers such as Beethoven, Bartók, Schubert and Debussy. One result was his ongoing series Játékok, short works for piano solo or piano four hands in which Kurtag comments on the works of these aforementioned composers and on questions that he feels they left behind. The Játékok are witty, understated, informal works in which the composer plays with ideas and familiar sounds in unfamiliar ways. Andsnes has often included the works on his recital programmes and has chosen eight of them for this recording.

Leif Ove Andsnes is one of today’s most sought-after performers. During the first half of 2009, he performs the Dalbavie Piano Concerto in Paris and Amsterdam, gives recitals with Heinrich Schiff in Italy and solo recitals in Austria, France, Germany and Luxembourg. He is also preparing an exciting new project entitled Pictures at an Exhibition Reframed, in which he performs the Mussorgsky work alongside the South African visual artist Robin Rhode, who simultaneously creates an onstage installation. The Pictures at an Exhibition Reframed project will be unveiled in November 2009 in New York and will subsequently tour the major European cities before continuing to Beijing and Abu Dhabi in 2010. The development and realisation of the project will be captured on a film made by Norwegian television (commissioning sponsor StatoilHydro) and issued as a CD and DVD by EMI Classics.

Leif Ove Andsnes, an exclusive EMI artist for over a dozen years, has won four Gramophone Awards and the 2006 and 2007 Classical Brit Awards. His discography includes a wide variety of repertoire ranging from solo sonatas by Haydn, Chopin, Schubert and Schumann to piano concertos by Grieg, Haydn, Mozart, Brahms, Rachmaninov, Schumann, Shostakovich, Bartók and Britten. He has recorded Schubert Lieder with Ian Bostridge, Bartók Sonatas with Christian Tetzlaff and Brahms and Schumann Piano Quintets with the Artemis Quartet (for Virgin Classics). The Brahms and Schumann Piano Quintets CD won a 2008 Gramophone Award. Also released in 2008 were a CD and DVD, each titled Ballad for Edvard Grieg, commemorating the centenary of the composer’s death (The DVD won the Golden Prague “Grand Prix”) and a second Mozart concertos disc featuring Piano Concertos Nos. 17 & 20 (K453 and K466) in which Leif Ove also conducts the Norwegian Chamber Orchestra.

…this is a notable addition to Andsnes's discography. All his virtues are in display here, from the bravura of his flourishes and crispness of his chordal delivery in the two concertos to the intimacy and sensitivity to the tiniest resonances in the solo pieces.

This substantial demonstration of Leif Ove Andsnes's commitment to contemporary composers is framed by two fine Bent Sørensen pieces which underline the programme's governing concern with music that echoes, or shadows, other music. Lullabies is brief but its spirit of troubled nostalgia carries over into The Shadows ofSilence itself. The title may be paradoxical – surely it is sound, not silence, that is being shadowed? – but the music is superbly crafted and powerfully expressive, ranging in mood between fluttering, melancholy reticence and tolling menace.
Sørensen's music is refined even at its most aggressive, and as such it beautifully complements the eight miniatures from Kurtág's Játékok (“Games”) which need only a few seconds to create complex worlds of starkly delineated yet imaginative allusion. But the meat of Andsnes's double-decker sandwich is provided by two sizeable concertos, both of which acknowledge the apparent impossibility of escaping from the aura of romantic warhorses that, from Beethoven to Rachmaninov, still provide a staple diet for concert audiences (and record buyers).
The Lutoslawski – written for Krystian Zimerman and recorded by him with the composer conducting soon after the premiere – is an intricate tapestry referencing virtuoso and poetic concerto traditions in an ironic yet never cynically exploitative fashion, and Andsnes manages to avoid po-faced downplaying of its parodic aspects while not exaggerating them either.
After this, Marc-André Dalbavie's concerto is a disappointment, taking far too long to turn time-honoured pianistic conventions into clichés.
But Andsnes and Welser-Möst give it their all, and in well-engineered sound this is a disc which, for the most part, can be cherished for being on the side of the angels, where contemporary repertoire is concerned.

Sørensen's music is refined even at its most aggressive, and as such it beautifully complements the eight miniatures from Kurtág's Játékok ("Games") which need only a few seconds to create complex worlds of starkly delineated yet imaginative allusion. ...Andsnes and Welser-Möst give it their all, and in well engineered sound this is a disc which, for the most part, can be cherished for being on the side of the angels, where contemporary repertoire is concerned.