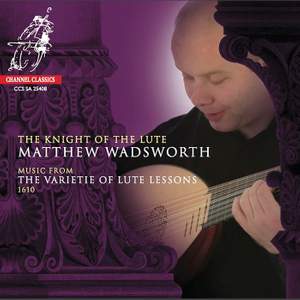 Matthew Wadsworth - Knight of the Lute

Music from The Varierie of Lute Lessons, 1610

Dowland: The most sacred Queene Elizabeth her Galliard

Dowland: The Most High & Mightie Christianus the 4th King of Denmarke, His Galliard

Dowland: Earl of Derby, his Galliard

Matthew Wadsworth: I used to spend hours in the basement of the library, listening to recordings of one of my great idols, Julian Bream – deciding which piece to write out and learn next. Since then, it has always been a burning ambition of mine to one day record the Varietie of Lute Lessons, and some 15 years after my initial forays into this stunning repertoire, it felt right to finally commit the pieces to disc.My choice of pieces for this recording was largely instinctive. It wasn’t possible to record all 42 pieces, so I chose the ones which spoke to me the most at the time, with a view to representing all styles and genres of the book.

Matthew Wadsworth, lutenist, is in great demand as a soloist, continuo player and chamber musician. He has appeared at major festivals in the UK, Europe and North America and can frequently be heard on radio, both in live performance and on disc.Wadsworth was recently made an Associate of the Royal Academy of Music and was nominated by The Independent as a “Rising Star for 2005”.

Wadsworth's… playing… is stolid and deliberate yet strangely luminous - no light but rather darkness visible. In his hands Anthony Holborne, Thomas Morley and Daniel Batchelar's dark, sophisticated pavins… almost take on the character of late Beethoven.