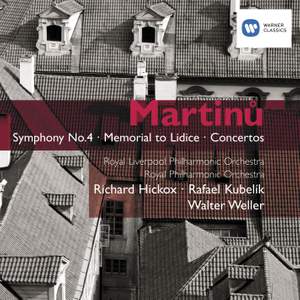 Bohuslav Martinu (1890-1959) was born in the small town of Policka in the Bohemian-Moravian highlands. He was a poor academically but showed great promise as both a musician and as a composer. He soon joined a student quartet and his town’s string orchestra and by 15 he was leader of the town’s String Quartet and he made his debut as a soloist. Public donations allowed him to be sent to Prague in 1906 but, although he revelled in the music, he hated the strict regime and was expelled; further attempts on succeeding years were also failures. During WWI he was made a part time member of the Czech Philharmonic and this experience added significantly to his understanding on how to achieve specific instrumental sonorities. He moved to Paris in 1923 to study with Roussel and it was here he acquired his love of jazz which duly inspired a number of his compositions. The earliest work to appear in this set is the Concerto for string quartet and orchestra in 1931 the same year as he married Charlotte Quennehen, a French girl who had instinctively recognised his exceptional qualities and became his principal means of support. Her protection enabled him to compose freely. On a brief visit to his homeland in 1938 he realised that the threat of Nazi Germany would mean he would never see it again. This sadness purveys the Double Concerto for two string orchestras, piano and timpani. The imminent fall of Paris meant that he had to flee first to Aix-en-Provence and finally in 1941 to America. Emotional turmoil prevented composition and it was a year in Jamaica that restored his will to compose.

He felt homesick, no more so than when the Nazis totally destroyed the village of Lidice with all its inhabitants that inspired him to write the Memorial for Lidice in 1943. Serge Koussevitzky, who did so much for many émigré composers, assisted and much of his subsequent work is indebted to him including his six symphonies (of which No. 4 written in 1945 is included here) and the Sinfonia Concertante for oboe, bassoon, violin, cello soli and orchestra from 1949. La Jolla followed the next year and in 1955 Les Fresques de Piero della Francesca appeared – a symphony in all but name, which is now, rightly regarded as a masterpiece.