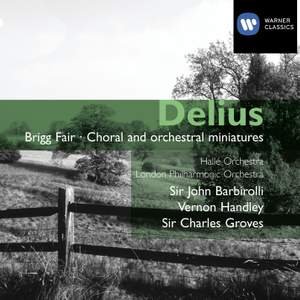 Delius: A Village Romeo and Juliet (1988 Digital Remaster): The Walk to the Paradise Garden (arr. Beecham)

I. Theme (with easy movement)

III. Variation 7 (Rather quicker but not hurried)

I. Autumn: The Wind soughs in the Trees

IV. The March of Spring: Woodlands, Meadows and Silent Moors

I. Slow, but not dragging

II. Gaily, but not quick

Frederick Delius (1862-1934) was born in Bradford of parents who had been born in Germany. His father was a successful wool merchant and although he allowed his son to study music he did not regard it as a career option. On leaving school he therefore joined the wool company but he proved unreliable; he did, however, visit Norway and Paris on the firm’s business and met life-long friends. In 1884 he was allowed to go to Florida as an orange grower. This gave him freedom from family pressures – he neglected the oranges but studied music and was greatly influenced by the music of the plantation negroes. He developed one of the most individual and easily recognisable harmonic and melodic styles of composition. He was strongly supported by the eminent conductor, Sir Thomas Beecham, who gave numerous performances of his work and clearly established an appreciation for it amongst its listeners. Some critics have remarked that whilst his formula for composition was artistically successful it was so but within a strictly defined and narrow emotional and expressive range – certainly this is borne out by the popularity of the shorter works which form the vast majority of this collection, especially the exquisite sensuous idylls catching the lights, sounds, perhaps even the smells of the English countryside.

His last ten years were blighted by illness and in 1928 Eric Fenby became his amanuensis thereby enabling the composer to complete a number of works including A Song of Summer.

He died virtually a recluse in Grez-sur-Loing and, as French law forbade his burial in his garden, his remains were removed from Grez’s cemetery after a year and moved to Limpsfield in Surrey.