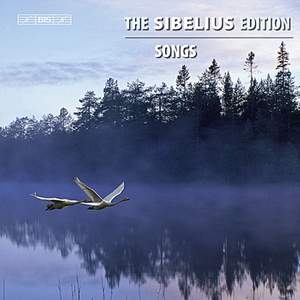 The Complete Solo Songs, including preliminary and alternative versions

Sibelius: Jag kysser dig ej (I Kiss You and Weary Not)

Sibelius: Lojet var utan hem (Wit Was Without a Home)

No. 3. Hjartats morgon (The Heart's Morning)

No. 7. Jagargossen (The Young Huntsman)

No. 1. Se'n har jag ej fragat mera (Since Then I Have Questioned No Further)

No. 2. Men min fagel marks dock icke (But My Bird is Long in Homing)

No. 6. Demanten pa marssnon (The Diamond on the March Snow)

Sibelius: Jag ville, jag vore i Indialand (I wish I were in India) (alternative version)

No. 2. Pa verandan vid havet (On a Balcony by the Sea)

No. 4. Harpolekaren och hans son (The Harper and his Son)

Sibelius: Pelleas and Melisande. JS 147: No. 6. The 3 Blind Sisters (version for voice and piano)

No. 3. Im Feld ein Madchen singt (In the Field a Maid Sings)

No. 1. Alven och snigeln (The River and the Snail)

No. 2. En blomma stod vid vagen (A Flower in the Path)

No. 7. Vanskapens blomma (The Flower of Friendship)

No. 8. Vartagen (The Spell of Springtide)

No. 3. Det morknar ute (Outside it is getting dark)

No. 1. Varfornimmelser (The Coming of Spring)

No. 2. Langtan heter min arvedel (Vain longings are my heritage)

No. 5. Sangarlon (The Singer's Reward)

No. 3. Vitsippan (The Wood Anemone)

No. 6. Blommans ode (The Flower's Destiny)

No. 2. Hennes budskap (Her Message)

Sibelius: Autrefois, Op. 96b (version for 2 voices and piano)

Sibelius: Belshazzar's Feast, JS 48: No. 2b. The Jewish Girl's Song (version for voice and piano, "Solitude")

No. 3. Hjartats morgon (The Heart's Morning)

No. 1. Se'n har jag ej fragat mera (Since Then I Questioned No Further)

Sibelius: 5 Christmas Songs, Op. 1: No. 5. On hanget korkeat (High are the snowdrifts) (version for 2 voices and piano)

This box contains a large number of previously unreleased recordings, as well as many world premières on disc. The 236 page booklet contains all song texts in the original language, with English translations.

Sibelius’s earliest music was instrumental and it wasn’t until he was in his twenties that he turned to the solo song genre. From that time on, however, he wrote songs at regular intervals – more than a hundred in total. They form a substantial part of his output and are treasured highly by admirers of the composer, although only a handful have gained a regular place in the international repertoire.

As Andrew Barnett remarks in his informative liner notes, ‘listening to them in their entirety reveals considerable lightness of touch and many a flash of genuine humour. The finest of them certainly reveal his gift for melody and his acute response to nature imagery, especially when setting poems featuring pantheistic imagery.’

Many of the songs were written for or premièred by leading Finnish singers. It is a fine cast of Finnish singers who perform their compatriot’s music on this collection, which also includes the highly acclaimed recordings by the Swedish mezzo Anne Sofie von Otter of some of the best-known songs, including Black Roses, The Diamond on the March Snow and But My Bird is Long in Homing. As for the accompaniments, the lion’s share is in the hands of Folke Gräsbeck, an undisputed authority on Sibelius’s piano scores and a key contributor to this edition.