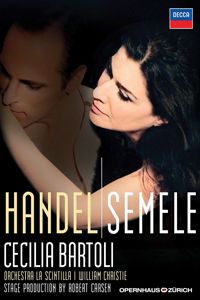 “Sung dazzlingly, “Myself I shall adore” was one of many high points in Bartoli's stunning performance, her first operatic role in a language other than Italian…The wonderfully intimate Zurich Opera House allows every detail of her performance to be savoured.” International Herald Tribune

Cecilia Bartoli’s first operatic Decca DVD release for over 10 years sees her triumphing in the title role of Handel’s late drama, ‘Semele’. This will undoubtedly be the most prestigious start possible to ‘Handel Year’ (marking the 250th anniversary of his death). Not only is this Cecilia Bartoli’s first DVD opera for Decca in 12 years (since Rossini’s ‘La Cenerentola’), it is also her first opera singing in English.

‘Semele’ is presented in Robert Carsen’s stylish modern dress production, originally seen in London, and most recently staged at the Zurich Opera in 2007 (where it will be revived in January 2009). The drama tells of the ambition of the beautiful mortal, Semele, who, not satisfied with being Jupiter’s mistress, strives with fatal results to supplant Jupiter’s wife, Juno. Conceived as an oratorio but nowadays presented as a stage drama, it is a superb vehicle for all the principals, not least the substantial title role, which includes such popular arias as ‘Endless pleasure’ and ‘Myself I shall adore’. Robert Carsen’s acclaimed staging hints at parallels with the problematic relationship between the late Princess Diana and the British Royal Family.Outstanding orchestral accompaniment comes from the renowned combination of William Christie and La Scintilla