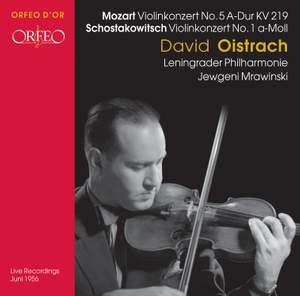 The Leningrad Philharmonic gave two concerts under its principal conductor, Evgeny Mravinsky at the Vienna Festival in 1956, but it was the soloist who received more attention than either Mravinsky himself or his orchestra. David Oistrakh, one of the most distinguished instrumentalists of his generation, not only as a concert violinist but also as a chamber musician, was returning as one of the world's leading virtuosos, his appearances followed by public and press alike, unanimous in their acclaim. His performance of Mozart's A major concerto was as brilliant and as perfectly shaped as his playing of Shostakovich's First, a work dedicated to him, his performance of the cadenza providing a dazzling transition to the final movement, which caused a sensation wherever he played it. Particularly noteworthy about this Vienna performance is the fact that it reunites the forces involved in the world première in 1955, namely, Oistrakh and the Leningrad Philharmonic under Mravinsky.