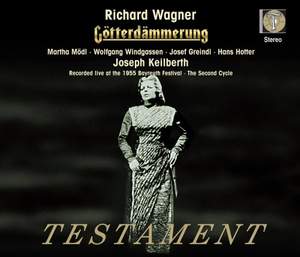 Here, for once, is a recording of a great late Wagner opera which can be recommended with virtually no reservation. …Brünnhilde is sung by Martha Mödl… here she is utterly inspired… Hotter... — BBC Music Magazine, June 2009, 5 out of 5 stars More…

In 2006/07 Testament released for the first time ever (on 14 CDs – SBT141412) the legendary stereo recordings made by Decca at Bayreuth of the first cycle of the 1955 performances of the Ring, conducted by Joseph Keilberth and staged by the Festival’s co-director, the radical regisseur Wieland Wagner. Partly for security, partly out of interest, Decca’s engineers under Peter Andry also recorded the second cycle, from which this first-ever release of Götterdämmerung is drawn, providing a chance to appreciate the depth of New Bayreuth’s casting resources. For these performances Martha Mödl took over as Brünnhilde (she and Astrid Varnay regularly alternated in the Festival cycles between 1953 and 1956) while Hans Hotter, the production’s Wotan/Wanderer from 1952, took on the role of Gunther, one of the other Ring roles which (along with a rare Hunding in New York at the strange behest of Rudolf Bing) he occasionally undertook. The reason for Hotter’s appearance as the Gibichung leader appears to have been to allow Hermann Uhde, the production’s regular Gunther, to settle into the new production of Der fliegende Holländer (available on Testament SBT21384) opening that year – although Hotter himself also sang the Dutchman that year. Martha Mödl (1912-2001) was one of the new, yet highly experienced, generation of singers that Wieland and Wolfgang Wagner were so keen to bring to their new take on post-war Bayreuth. By 1950 she was singing Kundry in Berlin for Joseph Keilberth and for Wilhelm Furtwängler at La Scala. Both conductors took her up in a big way (Furtwängler recorded Fidelio, the complete Ring for Rome Radio and his EMI studio Walküre with her) and recommended her to Bayreuth where she sang from 1951-60, in 1962 and from 1965-67. She was the first Kundry in Wieland’s new Parsifal under Knappertsbusch (1951-60); the first Isolde in his first Tristan under Karajan; a mainstay of his first Ring as Brünnhilde, once Sieglinde (which she regarded as a mistake), Gutrune and even the Third Norn; Waltraute in his second Ring from 1965-67 (“you know”, Wieland told her on his sick bed, “it’s like a little Brünnhilde, and that’s how I want you to play it”); and took over Isolde from Birgit Nilsson (the singer that Mödl’s mother had once heard and told her daughter “that’s a real rival for all of you!”) at the final performance of the first run of Wieland’s second Tristan.

Extract from the note Mike Ashman, 2008

Here, for once, is a recording of a great late Wagner opera which can be recommended with virtually no reservation. …Brünnhilde is sung by Martha Mödl… here she is utterly inspired… Hotter shows Gunther as an uneasy king, alternately arrogant and anxious, and morally collapsing in Acts II and III in a subtle and extraordinary performance. Wolfgang Windgassen is even more moving, tireless and likable as Siegfried than he was in the previously released cycle... The conductor Joseph Keilberth is on top form.

…Hotter's Gunther… has no problems with the part's high-lying lines, and his presentation of Brünnhilde to the Gibichungs is electrifying. There is also Keilberth's galvanising energy and the eloquence and power of the other singers. The Act 3 Funeral Music is a high-point...

Testament’s earlier historic release of the first commercially recorded Ring cycle — by Decca, which for contractual and internal political reasons left the master tapes gathering dust in the archives for more than half a century — is one of this decade’s great classical-record events. The second cycle was recorded in 1955 by the same engineers for backup purposes, although how much of it Testament will issue apart from this Götterdämmerung is unclear. Astrid Varnay and Martha Mödl, the two great heroic sopranos of the post-war “New Bayreuth” era, were the Brünnhilde and the Third Norn in Testament’s release of a 1951 performance conducted by Knappertsbusch. In 1955’s second Ring cycle, they switched roles.
If anything, Mödl is more eloquent with the text (every word is audible), and perhaps more vulnerable and sensuous, with her smouldering feminine mezzo colouring, than the invincible, flame-like Varnay. Never noted for the brilliance of her top Bs and Cs, Mödl sometimes sounds pushed, but her greatness lies in the tragic stature she brings to the redemptive heroine in her final self-sacrifice. The other notable cast change brings Hans Hotter, the Wotan of this production, as the Gibichung ruler, Gunther.