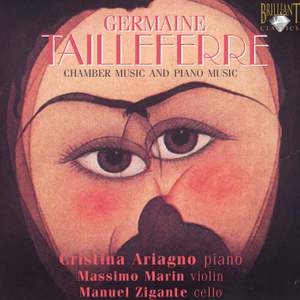 Tailleferre: Pastorale in A Flat

Tailleferre: Suite for Piano (after Bretagne)

Tailleferre: Sonata for Violin & Piano No. 1 in C sharp minor

Tailleferre: Sonata No. 2 for violin and piano

Germaine Tailleferre (1892–1983) was born near Paris, the youngest of five children. She showed a remarkable talent at an early age for improvising at the piano.Although her lower middle class parents wanted her to seek paid employment, she succeeded in her goal of studying at the Conservatoire. There she decided to devote herself to composition, and soon came to attention of Erik Satie.

She became a member of the group of young composers called ‘Le group des Six’. Under the guidance of Satie, the young Poulenc, Milhaud, Honegger, Auric, Durey and Tailleferre gave concerts of their compositions. She went on to study with Koechlin, became a friend of Ravel, and her music was performed by artists such as Cortot, Thibaud, and Rubinstein. She moved between New York and Paris, socialising in the same circles as Chaplin and the new stars of Hollywood.

This 2CD set covers her compositional career from the early period of 1912-20 where she shows clear influences of Faure and Debussy, through to the 1930-50 period when her mature voice as a composer was truly established. The sonatina of 1973 is a remarkably fresh work, justifying Milhaud’s comment ‘Germaine Tailleferre’s music is always twenty years old’.

A valuable release of music by one of the 20th century’s most fascinating musical figures: several works new to the record catalogue.