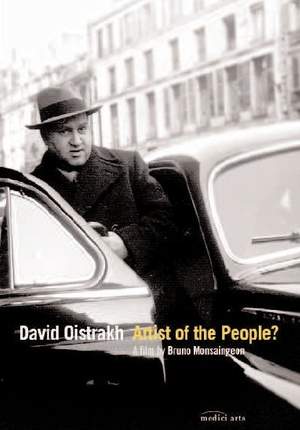 David Oistrakh, Artist of the People?

A film by Bruno Monsaingeon

A brilliantly made documentary, with interviews with many great artists, not unfortunately Oistrakh himself. The world in which he lived is vividly evoked, but the snatches of his playing are... — BBC Music Magazine, January 2009, 4 out of 5 stars More…

Alongside Fritz Kreisler, Jascha Heifetz, Nathan Milstein and Yehudi Menuhin, David Oistrakh is universally recognised not only as one of the few truly great violinists of the 20th century and as one of music's most striking personalities. As a result of the political situation of the time, and in particular of Stalinism and the Second World War, Oistrakh's career in the West developed relatively late. It was not until 1953 that he began to make regular appearances in the West, by which time he was already 45 years old, although his legendary reputation had already made him the subject of endless speculation throughout the Western musical world. His first proper international tours instantly confirmed the legend and from then until his death in Amsterdam in 1974 he pursued a varied career both in the concert hall, as soloist and conductor, and as a teacher. His genius as a musician inspired numerous composers to write for him - one thinks of sonatas and concertos by Prokofiev, Khachaturian and Shostakovich, among others, which he not only premiered but continued to perform all over the world. Oistrakh grew up in exceptionally troubled circumstances (he was born in Odessa in 1908) and was largely self-taught as a violinist, yet he became the true founder and undisputed master of the Soviet school of violinplaying, the most prestigious school of our times. Last but not least, Bruno Monsaingeon, the renowned film-maker, brings David Oistrakh's genius to life.

A brilliantly made documentary, with interviews with many great artists, not unfortunately Oistrakh himself. The world in which he lived is vividly evoked, but the snatches of his playing are agonisingly brief.

Monsaingeon's 1994 film, now making its DVD debut, examines the political context of Oistrakh's career as well as the nature of his musicianship. Oistrakh (1908-74) was the leading violinist in a generation of
brilliant Russian musicians who became instruments of the Soviet state. He negotiated the highwire between conformity and artistic freedom more easily than his peers, because he was by nature an unassuming man who
only wanted to make music. With the help of fascinating archive footage Monsaingeon traces Oistrakh's life-story from his youth in Odessa to his wartime exploits, when he joined the Communist Party - one of the
compromises necessary for survival. Oistrakh was part-Jewish but had no desire to leave the country that had nurtured him. Interviews with Gennadi Rozhdestvensky and Gidon Kremer explain how Oistrakh was
bullied and exploited by Soviet bureaucracy, but the most valuable clips show him duetting with Menuhin in the Bach Double Concerto, and playing Shostakovich's two concertos and talking to the composer. Here we can appreciate his humanity, his exceptional command and huge range
of intensity.