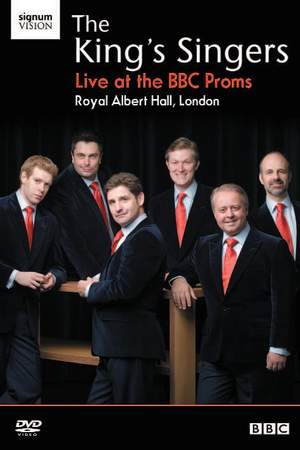 The King's Singers - Live at The BBC Proms

Rogers, J: Hears not my Phyllis

Hobbs: Phillis is my only joy

trad.: Blow Away the Morning Dew

Sullivan, A: The long day closes

A live and televised recording from this year's BBC Proms performance on 5th August by the most famous a cappella group ever: the King's Singers. Regularly performing in excess of 100 concerts every season complemented by recording and teaching, The King's Singers delight audiences around the world with their incomparable musicianship, charm and wit.With the recent album release Landscape and Time having been described as possessing "singing of rare distinction", and "stunningly high musical standards", they have maintained their place at the apex of a cappella singing, and are counted amongst the world's elite classical performers. Continuing Signum's release series in celebration of the group's 40th Anniversary year, Simple Gifts (SIGCD121) and a 5-CD ‘best of’ (SIGCD120), this performance was in many ways a retrospective of the groups musical history, encompassing some of the earliest arrangements that the original line-up performed right up to contemporary works that they recently commissioned. Available on CD and DVD, the DVD includes extra interviews with the group from Suzy Klein and Gareth Malone, star of BBC series The Choir, and can also be enjoyed in 5.1 surround sound.

"In an exquisitely programmed concert, there was music ranging from the Renaissance to the present, including the opening selection of Poulenc's witty “Chansons françaises" and various Victorian parlour songs "in the biggest Victorian parlour ever built." …the pure quality of the vocal balance is quite extraordinary. The King's Singers had travelled back in time some 400 years (who needs Dr Who at the Proms?). Then followed an example of the many works the group has commissioned, John McCabe's haunting evocation of American wastelands, "Scenes in America deserta", based on the writings of architectural historian Reyner Banham. McCabe took his bow. The evening ended with folksongs arranged by Gordon Langford and members of the group, Bob Chilcott (who left in 1997) and current baritone Philip Lawson. Langford's "Widdicombe" Fair played to the group's effortless resource of funny voices and genial comedy. The encore was Arthur Sullivan's arrangement of "The Long Day Closes", apposite for a concert finishing at fifteen minutes short of midnight and perfectly judged in this performance." Classical Source