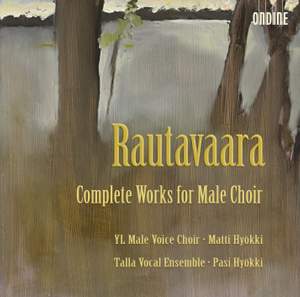 Especially striking, its tenor line soaring over a quasi-orchestral vocal fabric, is the literary Leaves are Leaves; but finer still are the Four Alexis Kivi Songs (1998-2005), from his opera... — BBC Music Magazine, March 2009, 5 out of 5 stars More…

Rautavaara: Autumn at the Rivermouth

No. 2. The Morning Comes

No. 5. Hope Is the Thing With Feathers (Toivo on hoyhenpukuinen)

No. 9. Me emme kuole koskaan (We Shall Never Die)

No. 11. Song of Myself (Laulu itsestani)

Rautavaara: 4 Songs from the Opera Aleksis Kivi (arr. for choir)

No. 3. Oravan laulu (The Squirrel)

No. 4. Sydameni laulu (Song of My Heart)

No. 1. Serenade fur meine Frau (Serenade to My Wife)

Rautavaara: The Fox and the Sick Cockerel

No. 2. Kaukana on minun maani (Far Away Lies My Husband)

This release marks the culmination of the 80th birthday celebrations for Ondine's best-selling omposer, Einojuhani Rautavaara, following a successful campaign on his back catalogue. Ondine has had a long and fruitful association with the Finnish cult composer since the late 1980s, having recorded the premières of many of his works and garnering many awards along the way, including a Grammy nomination for his Angel of Light (Symphony No. 7). This new recording features his complete works for male choir - one of the most popular genres in this composer's artistic output.The two ensembles are the YL Male Voice Choir (Helsinki University Choir), one of the world's most prominent male voice choirs and the commissioner and dedicatee of most of Rautavaara's (and also Jean Sibelius') works for male voice choir. Only recently the Choir was featured on the critically acclaimed recording of Sibelius' Kullervo, along with the Talla Vocal Ensemble, a smaller group of 10 singers originally founded within the YL Choir.

Especially striking, its tenor line soaring over a quasi-orchestral vocal fabric, is the literary Leaves are Leaves; but finer still are the Four Alexis Kivi Songs (1998-2005), from his opera about Finland's equivalent of Pushkin and Burns, the main solo 'Melancholy' movingly underpinned by YL's awesomely dark, firm basses.

YL divide up the works between the main body and their 10-man offshoot, the Talla Vocal Ensemble – the latter, incidentally, are superb in the two TS Eliot Preludes (1956, rev 1967).
Ondine's recording is rich, with great presence, matched by singing of urgency and vividness.
And YL and Talla's interpretations have impetus and power, as in the half-hour-long A Book ofLife (1972), which is split between the two groups (as are the Four Serenades, 1978), setting 11 poems – including texts by Rilke, Rimbaud, Goethe, Emily Dickinson and Whitman – in five languages.
The greater textural palette attained through using two differently sized choirs is more akin to that found in some early-music recordings. Perhaps there's a loss of intimacy and a certain dreamy quality – for instance in the Psalms (1968-71) or some of the folksong arrangements.
But this is a small price to pay for the gains which, for collectors of Rautavaara, will chiefly be the quartets of songs to poems by Aleksis Kivi (arr 2005) or from the opera Rasputin (arr 2006), not otherwise issued.

…so this comprehensive and magnificently sung new collection has the field to itself.