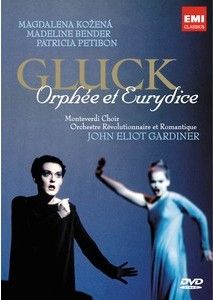 In Robert Wilson's production neo-Expressionist gesture outlaws simple human emotions. But Gardiner and his orchestra are in fine fettle and Kožená an affecting Orphée despite the Frankenstein... — BBC Music Magazine, August 2009, 3 out of 5 stars More…

Sung in French with English and German subtitles

When the historic Theatre du Chatelet in Paris re-opened after a period of extensive refurbishment, the first two productions mounted in the theatre were Gluck’s Alceste and Orphée et Eurydice.

Both operas were sung in their French versions and were mounted and designed by Robert Wilson and conducted by John Eliot Gardiner. This was the first time Wilson and Gardiner had collaborated and their individual credentials combined to produce an exceptional result.

American polymath Wilson was responsible for some of the most ambitious avant-garde performance projects of the 1970s and 80s.Since the mid-1980s he has increasingly brought his prodigious creativity to works fiom the standard dramatic and operatic repertoire, transforming them into his own unmistakably minimalist yet grandiose visions. His styled, classical interpretations of Alceste and Orphée bear his trademarks of an uncluttered stage and the arresting use of colour and light. They are not so much timeless as, in Robert Wilson’s words, “full of time”. With their minutely rehearsed gestures, at once formal and poetic, the singers have the grace and elegance of Balanchine or Martha Graham dancers.

A key figure in the revival of Early Music, John Eliot Gardiner has long been a champion of Gluck’s French operas and is a great Gluck conductor. He received enormous critical acclaim for his musical direction of both Orphée and Alceste at the Chatelet, as did his orchestras and chorus. He sought to rid the operas of any vestiges of remoteness or venerable respectability and to release the huge emotional charge that lies behind the beauty of Gluck’s classical sobriety. The stories are, after all, he says, not only poignant and deeply moving, they have an immediate and contemporary relevance: they portray two married couples striving to protect their union and their love, plumbing the very depths of their emotional strength and summoning the courage to make huge personal sacrifices. “If presented in a way that’s immediate and with tremendous intensity and truth of expression then all the dross and superficiality of the stage action falls away and you’re left with what’s actually a very visceral connection between two living people.”

Television’s top opera director, Brian Large, worked closely with Robert Wilson and John Eliot Gardiner to ensure that the translation of live performance to the small screen is of the highest artistic and techcal standard.

John Eliot Gardiner chose to use Berlioz’s 1859 revision of Orphee, which adapted the tenor role of Gluck’s 1774 score for the contralto voice of Pauline Viardot, adjusting the register for a mezzo-soprano. Underlining his preference for this version, he performed the opera with the nineteenth-century period instruments of his Orchestre Revolutionnaire et Romantique. His regular chorus, the Monteverdi Choir, excelled vocally and dramatically in its elegant contribution to the drama.

The Greek legend of Orpheus has captured the imaginations of many creative artists over the centuries. In this recording Magdalena Kozena brings to the role expressiveness, exceptional virtuosity and a rare emotion. Madeline Bender as Eurydice is possessed of a touching grace and beauty while Patricia Petibon is deliciously mischievous as Amour. All three of these young singers are among the cream of a new generation of operatic talent.

In Robert Wilson's production neo-Expressionist gesture outlaws simple human emotions. But Gardiner and his orchestra are in fine fettle and Kožená an affecting Orphée despite the Frankenstein make-up.

Orphée et Eurydice is performed in the arrangement that Berlioz made in 1859 for the French mezzo-soprano Pauline Viardot. He based it on the later, Paris, version of the opera, but restored the part of Orpheus to the alto tessitura of the original. His influence can also be detected in this recording of Alceste, an opera which likewise exists in two versions: incensed at the way the brass interjections in 'Ombre, larve' were obscured by the extra notes required for 'Divinités du Styx', Berlioz proposed a simple change to 'Ombres, larves'; and his suggestion is adopted here by John Eliot Gardiner. You won't find it in the documentation accompanying the DVDs, because there isn't any. No synopsis, no background articles, no timings; not even a list of 'chapters', except on-screen. And some detailed help is necessary, because the purchaser, in the case of Orphée et Eurydice, is getting neither pure Gluck nor pure Gluck/Berlioz.
Robert Wilson's production of Orphée etEurydice is spare, bordering on minimalist. A blue background; cypresses in Act 1; a rock in the bleak Elysian Fields. There are some striking stage pictures, such as Orpheus silhouetted during the Dance of the Furies (another Gardiner restoration, not in fact danced), and the couple positioned on different levels in Act 3.
The acting is more movement and gesture than facial expression: effective as far as it goes, but the Blessed Spirits look pretty miserable. One miscalculation is the failure to show Orpheus disobeying the gods' commands by turning to look at Eurydice, thereby bringing about her second death. Magdalena KoOená, then virtually unknown, sings Orpheus superbly, including the bravura air in Act 1 (orchestrated, incidentally, by Saint-Saëns). The latter is remarkable for the cadenza, a joint effort by Berlioz, Saint- Saëns and Viardot herself. Madeline Bender and Patricia Petibon have much less to do; they do it well, but Petibon is not helped by the variable sound quality.
The two operas are connected by a suspended cube which, seen at the end of Orphée etEurydice, reappears in the overture to Alceste and many times thereafter. The chorus is heard but not seen: a cop-out, surely, but the dancers replacing the singers on stage provide an unforgettable image when they appear, arms upraised, between the columns of the temple.
Silhouette again, and gesture, too. Anne Sofie von Otter, severe, hair scraped back, is the picture of regal dignity at her first appearance.
Later, unable to look at the husband for whom she is sacrificing her life, her pain is palpable; at the end, after Apollo has descended with the reprieve, the camera focuses on the gentle smile that she permits herself.
The sharp-eyed will have noticed that two orchestras are employed: same players, different pitch. Even at the lower pitch, some of Alceste's music is transposed down. If von Otter is almost unbearably moving in the duets with Admetus, perhaps her finest moment is her scene, alone and terrified, at the entrance to Hades. Paul Groves as Admetus is almost as eloquent, and Dietrich Henschel, swinging an imaginary club, makes a hearty, no-nonsense Hercules. Both discs are well worth investigating.

Robert Wilson's production of Orphée et Eurydice is spare, bordering on minimalist. A blue background; cypresses in Act 1; a rock in the bleak Elysian Fields. Magdalena Kožená, then virtually unknown sings Orpheus superbly, including the bravura air in Act 1... Madeline Bender and Patricia Petibon have much less to do; they do it well...