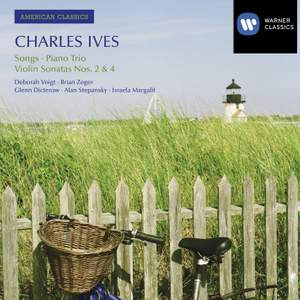 II. In the Barn (Presto)

Ives, C: Sonata for Violin and Piano No. 4, 'Children's Day at the Camp Meeting'

Ives, C: The Side Show

Ives, C: The Circus Band from Down East

Ives, C: Berceuse from Down East

Ives, C: At The River from Down East

Ives, C: The Children's Hour from Down East

Considering that Ives lived to be 80 years old the period during which he was most active as one of the most innovative of American composers was remarkably short. His earliest works date from the mid-1890s and by 1930 he was virtually silent.

This late inactivity was possibly engendered by the fact that his works were largely ignored during his lifetime and it wasn't until the mid-1960s that his music gained any kind of recognition. By then he had been dead for ten years.

This is the second Ives disc in this series and the programme here comprises some of Ives's instrumental and vocal music.