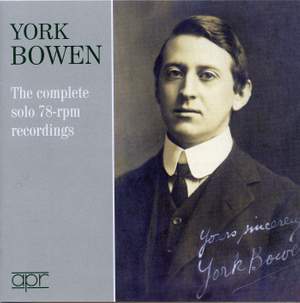 Bowen's supple musicianship and commanding technique (you sense there's always more in reserve) could hold their own with anyone's in his era. His Beethoven and Debussy are special. Reasonable... — BBC Music Magazine, February 2009, 4 out of 5 stars More…

In recent years York Bowen, the composer, has enjoyed a spectacular revival, but until now his talents as pianist (barring a late recording of his own music for Lyrita) have not been heard since the days of 78s. At the height of his success, in the first decades of the 20th century, Bowen was as much known as pianist as composer and frequently performed at the Proms amongst other things. His first recording, a very rare disc on the Marathon label, was released in 1915, but the bulk of his work was done for Vocalion; after they went bankrupt in 1927 he appears to have made no further 78s. Pride of place must go to Bowen’s Beethoven 4th Piano Concerto. This was the very first recording of the work and its neglect has been due to the fact that it was one of the last recordings to be made under the old acoustic process which was superseded the year the work was issued. Bowen’s pianism is extremely fluent and he plays his own cadenzas! Through all the featured works we hear a pianist who plays in the ‘grand manner’ and that, and his preference for romantic repertoire, reveal him as somewhat atypical of the English pianist of his time. Perhaps his nickname ‘the English Rachmaninov’ did indeed hit the nail on the head.

Bowen's supple musicianship and commanding technique (you sense there's always more in reserve) could hold their own with anyone's in his era. His Beethoven and Debussy are special. Reasonable sound for the vintage.

…throughout this collection, Bowen comes across as a wonderfully assure musician for whom the studio held no fears. Few pianists have ever played the middle section of Rachmaninov's G minor Prelude No 5 to such telling effect.