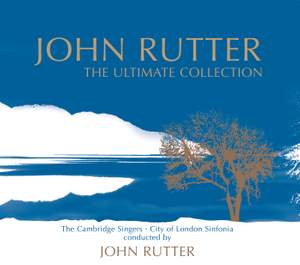 Rutter: For the beauty of the earth

Rutter: All things bright and beautiful

Rutter: The Lord bless you and keep you

Rutter: Open Thou Mine Eyes

My True Love Hath A Heart

Out Of The Deep

Rutter: A Prayer Of St Patrick

Rutter: O be joyful in the Lord

Rutter: Behold, the tabernacle of God

Sing A Song Of Sixpence

Rutter: Go forth into the world in peace

John Rutter is probably the world's favourite choral composer, and over the course of his long career has created some of the most popular and often performed pieces for vocal ensemble.

All 22 tracks on this collection performed by The Cambridge Singers, the choir which Rutter founded back in 1981, the tracks range from the joyous "Shepherd's pipe carol" of 1966 to the 1995 setting of Philip Sidney's poem "My true love hath my hear" from Birthday Madrigals.

The disc opens with one of Rutter's best-known works, the timeless "For the beauty of the earth" and also includes his settings of Psalm 23 and "All things bright and beautiful"--popular with choirs and audiences alike--as well as two movements each from his Magnificat and Requiem. Most tracks are accompanied by the City of London Orchestra, breathing new life into works which are often heard only with piano accompaniment.

The perfect gift for Christmas!