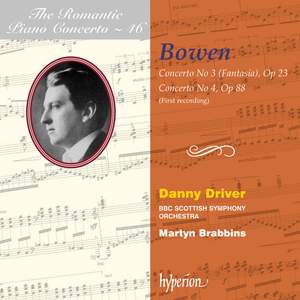 Absolutely stunning … what a way to be introduced to the music of York Bowen! — American Record Guide More…

Hyperion’s virtually single-handed rehabilitation of the music of York Bowen (known in his time as ‘The English Rachmaninov’), continues apace with this recording of the third and fourth piano concertos. Piano Concerto No 3 is a vigorous one-movement work with three well-defined sections of varying tempos in Fantasia style. Bowen’s sparkling performances of it drew plaudits from contemporary critics, who hailed it as his best composition thus far.

The Piano Concerto No 4 (said by Sorabji to be the greatest work for piano and orchestra ever written by an Englishman) is a large-scale Romantic, virtuoso work, impressionistic solo passages alternating freely with Straussian orchestral textures throughout. It was written for a BBC broadcast, and for the composer himself to perform; Bowen considered the work his best composition for the piano and an important addition to the concerto literature. It has not been given a studio recording until now.

‘Driver has all the makings of becoming a notable musician—one of integrity and intelligence, commodities all too rare … his naturalness, thinking, and understatement reminded, respectively, of Lupu, Brendel and Curzon’ (The Classical Source)

Absolutely stunning … what a way to be introduced to the music of York Bowen!

The Fourth Concerto of 1937 tells a stronger story. The first movement's smouldering opening at once impresses - as does its recall at the end of the finale, memorably combined with that movement's own themes. The second movement, too, has some wonderful lyrical flights. Danny Driver's pianism is fully and eagerly up to Bowen's considerable demands. He is supported by the BBC Scottish Orchestra's vivid and satisfying contribution.

Soloist Danny Driver emerges as the virtuoso hero of the hour

Sorabji, in the final essay of Mi Contra Fa, declared York Bowen to be 'at the present time [1947], the one English composer whose work can justly be said to be that of a great Master of the [piano]'. Hearing these two works, it's hard to deny that Sorabji had a point.
It takes a particular kind of pianistic sensibility to take up Bowen's virtuoso challenges and 'sell' them. Danny Driver certainly lives up to his surname. He, Brabbins and the punchy Scottish players play Bowen as if he were standard repertoire with the added zest of a live performance.
The 1908 four-movements-in-one Third Concerto (aka Fantasia), with its surging climaxes and soaring themes, offers 17 minutes of instant gratification, though it's a pity Hyperion did not provide separate tracks for the work's distinct sections.
The much longer (42'53”) Fourth Concerto (1937) is generally darker in character, no less attractive but even more rewarding. The writing veers between magical impressionism and passionate bravura outbursts couched in Straussian orchestral textures. Thrilling stuff. Driver, again, is firmly in the spotlight. This is his first recording for Hyperion. Here's to many more, including his planned complete York Bowen sonatas.

Danny Driver… Brabbins and the punchy Scottish players play Bowen as if he were standard repertoire with the added zest of a live performance. The 1908 four-movements-in-one Third Concerto… with its surging climaxes and souring themes, offers 17 minutes of instant gratification... The much longer... Fourth Concerto (1937) is generally darker in character, no less attractive but even more rewarding. The writing veers between magical impressionism and passionate bravura outburst couched in Straussian orchestral textures. Thrilling stuff.

This disc is the latest and arguably the most impressive so far in the continuing resuscitation of the music of London-born composer-pianist York Bowen (1884–1961).’These two concertos sound more Continental than English, with the single-movement Third (1908) betraying the influence of
Saint-Saëns and the more substantial Fourth (1937) having a Debussy-meets-Strauss late-Romantic palette. Both, though, have enough scintillating character of their own to reward repeated listening, while Danny Driver’s performances are masterly, stylish and full of dazzling pianism