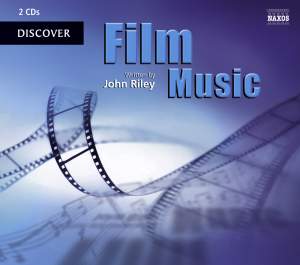 A Boat in the Fog

Korngold: The Adventures of Robin Hood

Newman, A: All About Eve Suite

Thomson, V: The Plow that Broke the Plains

The Plow that Broke the Plains: War and the Tractor

3:54
Show 32 remaining works on this recording

The Red Pony Suite: IV. Walk to the Bunkhouse

Bernstein: On the Waterfront

On the Waterfront (excerpt)

Barry, J: Out of Africa

Out of Africa: Main title theme

Things to Come: II. Interlude: The World in Ruins

Frankel: Curse of the Werewolf

Curse of the Werewolf: IV. Revenge and Escape

Alfvén: En Bygdesaga (A Country Tale), Op. 53 (Suite from the music for the film Mans kvinna)

Shostakovich: Hamlet - Concert suite from the film score, Op. 116a

Lieutenant Kije Suite, Op. 60: I. The Birth of Kije

The ‘Discover’ series opens the door to key areas of classical music. Through a combination of illustrative music tracks and a richly filled booklet, the exploration is both revealing and enjoyable.

As the twentieth century approached, a new art form was developed, one that would go on to dominate the next hundred years.

Though cinema began in silence, it quickly acquired sound and attracted musicians and composers. The new medium demanded a new approach, both aesthetically and technologically, but these problems were overcome remarkably quickly, allowing film composition to develop into a sophisticated branch of music-drama.

This booklet-and-CD set outlines the history of film music, introduces some of the major characters, and shows how their music works in the context of film.