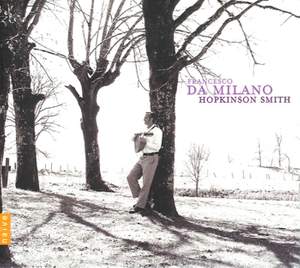 Il Divino - Music from the world of Francesco da Milano

Francesco Canona or Canova was born near Milan in 1497 and died in 1543. It was his place of birth rather than his family name which was almost exclusively used when referring to him during his professional life. He was the personal lutenist in Rome to Cardinal Ippolito de Medici and to Popes Leo X (1513-1521), Clement VII (1523-34), and Paul III (1534-1549). Francesco’s first printed works date from 1536. In that year, three publications appeared, two of which were devoted only to works by Francesco. The third was an anthology in which his music can be found alongside anonymous dances and pieces by his contemporaries. The works which have survived are of two types, Fantasias or Recercars, and vocal works, of which there are two in this program. Several anonymous dances also appear in this selection which are taken from Castigliono’s book of 1536. Also included is one dance by their contemporary, Alberto da Mantova, who is also represented in the 1536 book and who was lutenist to François I in France where he was know as Albert de Rippe.

Born in New York in 1946, Hopkinson Smith graduated from Harvard with Honours in Music in 1972. After his studies he became involved in numerous chamber music projects, including the foundation of the ensemble Hespèrion XX. His ten-year collaboration with Jordi Savall led to important experiences in collective music-making which were a creative complement to his career as a soloist. Since the mid-1980s, he has focused almost exclusively on the solo repertoires for early plucked instruments, producing a long series of prize-winning recordings for Naïve/Astrée. These feature Spanish music for vihuela and Baroque guitar, French lute music of the Renaissance and Baroque, early seventeenth-century Italian music, and the German High Baroque. The recording of his lute arrangements of the Bach Sonatas and Partitas for solo violin, released in the year 2000, has been universally acclaimed in the press. Gramophone called it ‘the best recording of these works on any instrument’.